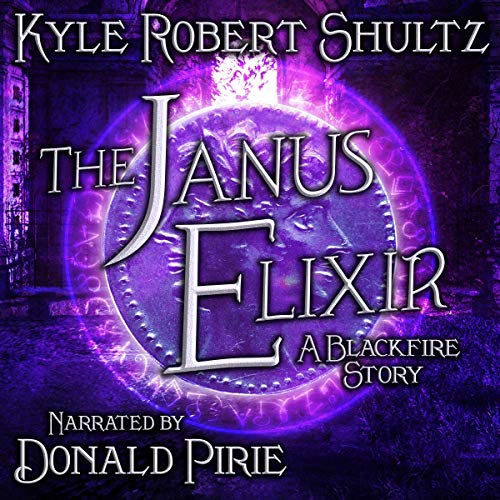 By: Kyle Robert Shultz
Narrated by: Donald Pirie
Try for $0.00

You think you know the secret of Dr. Jekyll and Mr. Hyde. You don't.

A perfect jumping-on point for the Afterverse books of Kyle Robert Shultz - spoiler-free; no prior continuity required!

Archaeologists are not often consulted by gods. However, Malcolm Blackfire is not a typical archaeologist - he’s also a dragon.

So, when the brain of the god Janus is stolen from Thanatos Abbey in the city of Talesend, Malcolm and his assistant Melody Nightingale are summoned by Hades himself to investigate.

It doesn’t take long for a dark design to emerge behind the bizarre theft. The mysterious Dr. Henry Jekyll is performing dangerous experiments. A powerful sorcerer named Hyde has suddenly emerged in the Talesend underworld. The answer to the mystery is clear....

Dr. Jekyll and Mr. Hyde are not what they seem. But by the time Malcolm discovers the truth about them, it may be far too late.

Note: This book takes place just after The Dark Excalibur, book one of the Blackfire series. It does not contain any spoilers for that story, and can be listened to beforehand. This story is also included in Beaumont and Beasley book four, The Hound of Duville and Other Stories, which continues the storyline of Dr. Jekyll and Mr. Hyde.

What listeners say about The Janus Elixir

Beautiful, but difficult to understand at times.

Me, being dyslexic, I absolutely love audio books. But, to be honest, although the narrators voice is beautiful, and fun to listen to, his accent was pretty thick, and it made it difficult for me to pick up certain words...or whole paragraphs. I have auditory problems, and if there is an accent that I am not very familiar with, or is too thick, it is really difficult to follow along. I was a bit disappointed because of this.

That being said, I had to give my full attention to listen to this audio book. Maybe it was the narrative voice that threw me off, but this story isn't my favorite. I didn't really like the cliff hangar in the end and being left with so many questions.

However, the charming, quick wit of the characters is my happy place, and I am still excited to listen to, or read more Kyle Shultz stories in the future.

The voices aren’t exactly how I imagined, but the book is definitely worth it!

I love how you get to see everything from Malcolm’s point of view. The way that Malcolm was so cocky and then lost to some guy was funny! And also his close idea was really smart. My favorite part about it was the way it ended though. The guy dies instead, and they can’t save him! I like how it doesn’t end very happily. I much prefer bad endings, especially since there are too many good ones!

What a brilliant story. There is a bit of a cliff hanger in this one. In more than one sense. So many unanswered questions!!! I love Gothic horror and Frankenstein and Jekyll and Hyde are two of my tops favorites so this was incredible. but... I need more answers! more Blackfire books, please.

If you are unfamiliar with Kyle Robert Shultz and his Afterverse, then this is a great jumping on point.

I loved this story so much, not only is it humorous and original, it takes your expectations and completely subverts them into an unexpected and surprising conclusion.

No matter how familiar you are with such classics as Frankenstein and Doctor Jeykell and Mister Hyde. The out come of this story is sure to shock you.

Malcom Backfire is a stand out character, his wit and scathing sarcasm are what make the story an enjoyable experience, that and narrator Donald Pirie who gives him a voice. His Scottish accent is so nice to listen to and his comedic timing pairs perfectly with Kyle's prose. I often say that first person POVs make the best audiobooks and this is no exception.

this is a great story for lovers of humor, classics, dragons and Scottish accents. I highly recommend this.

*I received an ACX code from the author for review purposes. My opinion is given honestly and without bias.*