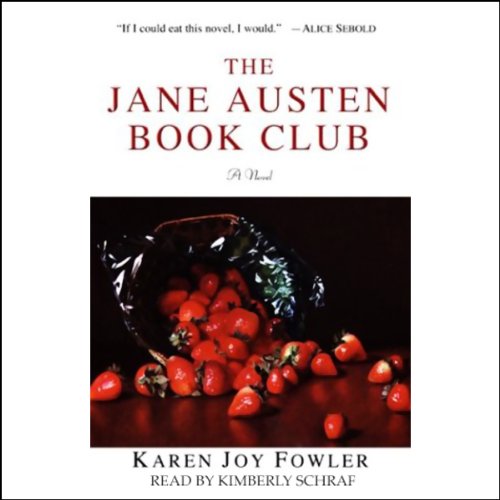 By: Karen Joy Fowler
Narrated by: Kimberly Schraf
Try for $0.00

A sublime comedy of contemporary manners, this is the novel Jane Austen might well have written had she lived in 21st century California.

Six Californians join to discuss Jane Austen's novels. Over the six months they meet, marriages are tested, affairs begin, unsuitable arrangements become suitable, and love happens. With her finely sighted eye for the frailties of human behavior and her finely tuned ear for the absurdities of social intercourse, Fowler has never been wittier nor her characters more appealing. The result is a delicious dissection of modern relationships.

Dedicated Austenites will delight in unearthing the echoes of Austen that run through the novel, but most readers will simply enjoy the vision and voice that, despite two centuries of separation, unite two great writers of brilliant social comedy.

"This exquisite novel is bigger and more ambitious than it appears. It's that rare book that reminds us what reading is all about." (The New York Times Book Review)
"Sly wit, quirky characters, and digressive storytelling....Like Austen, Fowler is a subversive wit and a wise observer of human interaction of all stripes." (Publishers Weekly)

What listeners say about The Jane Austen Book Club

This book sounded interesting, so I downloaded the sample to listen to it. Though not a Jane Austen fan, necessarily, I am in a book club, and I thought it would be worth the read. Unfortunately, Lisa was right- the reader has a raspy, sing-song voice, which might be better suited to a light mystery, like one by Diane Mott Davidson. I decided I just couldn't listen to the entire book by this reader.

I'm a big Jane Austen fan and I thought this book would bring her works into a more contemporary setting. The book started out slow, but I figured it would get better as it progressed. Unfortunately it didn't. There were snippets of each Jane Austen book and the themes were reflected in each chapter, but the whole concept didn't mesh very well. Too choppy at times as each character's story was being told. I had a hard time keeping everything straight. The narrator's voice didn't help either. She sounded condescending at certain points and just plain annoying the rest of the time. I'd like to give it another try, so I'll probably read it rather than listen to it.

Do the readers have to audition?

This reader is more suited to selling laundry detergent or margarine. Her bizarre sing-song was ill-suited to the subject matter and made her sound as though she did not understand what she was reading. Surely publishers audition these performers before employing them. This book makes me think they do not. It was a terrible distraction from the material.

The Jane Austin Book Club is beautifully crafted. Interwoven stories of the club members construct a community that is compelling for me as a reader to enter into. Their stories are framed by Jane Austin's to make a socially and historically textured world. The characters are eccentric and the author's descriptive sensibilities are surprising at times and hip. However, the narrator's sing song inflection and high pitch is annoyingly inappropriate for the text. I had to fight against it to enjoy the book.

What can I say? I wanted to like this book, but I just didn't. I have a rule that if I get to page 100 of a book and don't care about the characters or what happens next I give up. Likewise with audio books: If, after listening for two hours, I am bored and unengaged I give up. I listen to many audio books and very rarely do I give up on any, but after 2 hours of this book my thoughts were, " life is too short to endure any more of this". The narrators voice was dull and the story just didn't keep me interested so my advice is, use your precious credits on something else.

Frankly, I'm shocked at all the acclaim over this trite, glib book. The narrator was distracting and bland, and the story was basically a bore. Characters were, while on the surface eccentric, thin as paper adn without substance. Nothing, and I mean nothing they said was clever, or insightful or interesting. That we were on the subject of Jane Austen and this writer still managed to bore us to death was adding insult to injury. Don't bother reading this or listening to it.

I am not a huge Jane Austin fan and you don't need to be to love this book (though it does add to the enjoyment to have at least some idea of the plots of her novels - i.e. if you have watched several of the movies of Austin's books). This is a story about good, ordinary people, some of whom are close friends, others relatives and all connected through six people who meet every month in a book club to discuss Jane Austin's books. The book weaves in and out of their life stories, focusing on how the people are influenced and changed by life events. One glimpses a diverse range of occupations and interests, sees deeply into these people's personal lives and feelings and everything is wrapped up, eventually, in love, both happy and flawed. By the way I thought the narration was very good - nuanced and timed just right.

Austen and Romance in the 21st Century

Kimberly Schraf tells this story as she was gossiping about some absent acquaintances and their doings. She sounds a bit like a gossipy old cat. I am a bit puzzled at myself: I like her. Maybe that is what the book is, a scandal sheet. Yes, I enjoyed it. After all, for years I have had my own little Jane Austen fan club with a membership of one. Ok, I am not going to tell anybody that I actually enjoy books based on Jane Austen and her works to say nothing of her books. I am a big, tough, guy from somewhere along the bayous of Louisiana who has actually read "Lover's Vows", the play that wasn't performed in "Mansfield Park". Just between us, I am a sucker for anything Austen. Like Griggs and Catherine Morland, I have finished "The Mysteries of Udolpho" as well as "The Italian" and even a synopsis of the books in the Northanger Canon. Along with Marianne Dashwood and Anne Eliot, I am qualified to give an opinion on whether "The Lady of the Lake" or "Marmion" is superior. One wouldn't want that kind information getting out, if one has to live here you know.

Now, I wouldn't be caught dead in public with this book but on my Zune...who will ever know? One doesn't have to be a complete Austen nutcase to enjoy this book but it doesn't hurt. It took a while to write a review because the author was hard to pin down. As the synopsis states, the author is very witty but her book is not about Austen. It is cute stories about divorce, marriage, jobs, romance, kids, dogs and whatever comes out of the hat. At the same time, one is surprised how relevant Austen can be after 200 years. I even enjoyed the adventures of the lesbian member of this club. Tender homosexual love scenes are book closers for me but that is not what Karen Joy Fowler did here. She went for lesbian sky diving, rock climbing, broken bones incidents. PS, the movie isn't bad either but the book is better.

I have to agree with the reviewers who criticized the narrator of this book. I found her tone so distracting and annoying that I simply stopped listening, although I have been wanting to read this book for a while. I've decided that I would rather read this in paper form than listen to her for another minute.

I'm sorry that I didn't check out these reviews before I selected this book and I will do so in future to avoid being disappointed again.

Book good, narration not so much

I like the story, but I think the narrator's tone is much too arch for the material. Her reading distracts from the story, alas.