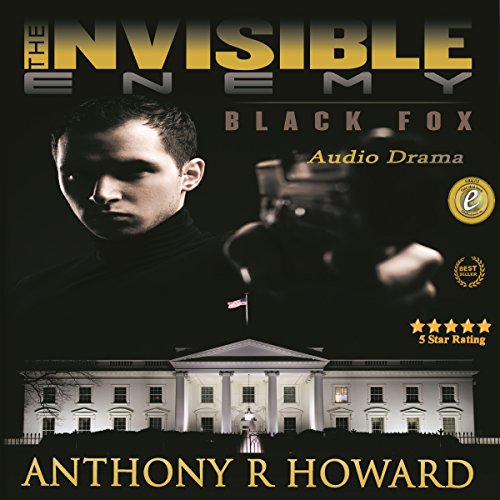 Experience the Audio Drama of the Next Generation: Over 2000+ professional grade sound effects throughout the bestselling novel and an original soundtrack with over 30 theater scores and music tracks produced to give a surreal theater experience for the listener.

It starts when reporter Dorian Valentine discovers a horrific secret regarding the Strategic Offensive Reduction Treaty (a critical peace agreement between the former Soviet Union and the United States): One side is cheating, and even worse - the cheating side holds the ultimate trump card. Brutally trained from birth to live, talk, and think like Americans, Russia has constructed the most dangerous network of secret operatives ever known - created for the ultimate trinity: Intelligence, Espionage, and Warfare. This dynamic organization has been planted on U.S. soil long ago by the former KGB to retrieve information at any cost, cause political catastrophe, or kill on moment's notice. Now they are out of control, striking fear into the heart of the Pentagon. The Central Intelligence Agency assembles a powerful team of agents that "do not exist" in an attempt to terminate an enemy that cannot be caught by any traditional methods. The Invisible Enemy grabs the listener by the arm, and casts them deep into the furious depths of intense warfare, awesome espionage, and unpredictable deceit - where there is a frightful undercover agenda that even the operatives themselves are not aware of.

The listener is paralyzed with anticipation as the plot somersaults out of control after the enemy operatives swiftly perform a devastating political strike, and then realize they have been set up. Here the game changes and no one has told them the rules. Betrayed by their own country and thrown into a world they cannot trust, they are forced to depend on the most potent weapon they had ever been trained to use: their unnatural minds. In a fast paced novel that spins from one explosive scene to the next, the most high-tech weaponry is used including speed of light weapons, "smart chips", artificial intelligence, and never before exposed government technology and organizations, thus introducing a new, exciting, untapped level of spy craft where nothing is what it seems.

About the author: Anthony R. Howard has been an industry recognized consultant for the premier global technology firms for over 12 years. Presently he is a leading Advanced Systems Consultant for one of the world's largest Information Technology firms where he was the winner of the National Federal Office Systems Award (FOSE - Nation's Largest Information Technology Exposition Serving the Government Marketplace), and the 2004 winner of Government Computer News Best New Technology Award. Several case studies have been published on Howard's solutions across the Information Technology industry. Currently he provides enterprise technology solutions and advisement for America's most distinguished clients including a sizeable amount of work for the U.S. Defense Sector, Department of Justice, and the Department of Homeland Security. After founding his own technology firm, Howard completed his formal education with a Masters of Business Administration with a concentration in Information Technology. His vast career has included controlling hundreds of devices worldwide from secure Network Command Centers to relocating overseas to Amsterdam for more than a year to solve technology issues for American based companies. He has also worked briefly for a private military logistics corporation that contracts a sizable amount of work from the Department of Defense and other military institutions.

What listeners say about The Invisible Enemy: Black Fox

What did you love best about The Invisible Enemy: Black Fox?

The story was so exhilarating with the perfectly placed sound effects (must have been thousands) and there were theater scores made that complemented the scenes perfectly to create a surreal experience almost better than the movie theater. This is what all audiobooks should be like. Supporting the authors smooth voice were a cast of characters reading other portions of the book. The seamless blend of the two made listening to Black Fox not only enjoyable but exciting. Keeping my fingers crossed for the sequel to be released as a sequel as well...Will definitely purchase it as well!

I liked the the unpredictable twists and turns best about the story. It gets started extremely quickly and does not let the reader go. You are instantly brought into a world of action, spies, deception, covert technology, and riveting scenes - and the sound effects and actors help bring you there immediately. I had heard the buzz about the print book and glad I got the audiobook.

What about Anthony R. Howard’s performance did you like?

To be the author and the narrator, he did a great job and complemented the several actors nicely

it was, but since it was 8hrs+ I simply could not finish it all in 1 sitting.

The Narrators voice is simply sexy. This is unlike any other audiobook I have listened to in that incorporates not only a great plot, but exception musical scoring and cool sound effects. I've not listened to anything quite like this before. A great bridge between book and movie. The cast of characters, music and sound effect bring the book to life in a way I have not heard before.

Fast paced action from beginning to end. I can't wait to get started with the sequel.

Good story, music and sound effects over the top and a bit annoying at times, no ending in fact I'm not sure what happened to the end, one minute it was still exciting, closing in on the operatives, and the next we had an interview with the Author. As far as I can see there is no follow up book to explain what happened next???