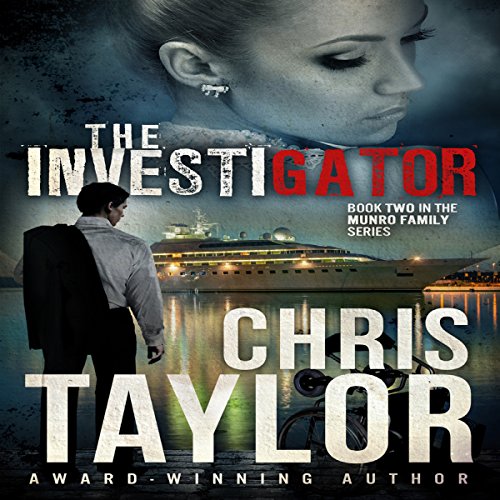 A woman who thought she could run away from her past.

At 14, Kate Collins ran away from home. Ten years later, her mother has disappeared without a trace. Faced with no other choice, she returns home. Kate is convinced her stepfather is responsible, but he is a highly decorated police officer. Who will take her accusations seriously?

Banished to a small country town after reporting his city superiors for corruption, Detective Riley Munro is never going to accuse the town's recently retired police commander of murder. But Kate's fear and distress seem genuine and her mother does seem to have disappeared. With reluctance, he agrees to investigate.

After making rudimentary enquires, he's told Kate's mother is on a cruise. The information pans out. On the verge of closing the case, Riley is taken by surprise when he receives a subtle threat from his boss, the new police commander, to leave Kate's stepfather alone.

Why would the new commander feel the need to warn him off? With his instincts on alert, Riley digs deeper and discovers not only is Kate's mother in a wheelchair, she also hates the water.

Is Kate telling the truth? Is her stepfather, the former police commander, guilty of murder? Or is Riley allowing the sad vulnerability in Kate's beautiful eyes to cloud his judgement?

What listeners say about The Investigator

I’ll tell you one thing: This woman, Kate, was the whiniest and most frightened heroine I’ve ever read about. She was obviously molested by her stepfather when she was a teenager BUT now she’s 24 and still scared spitless of him. At 24 she should have been ready to kick the s**t out of him. And what was soooo stupid is that she got up her courage to go to his house for her mother’s laptop and was so afraid of him he hit her in the back twice to get her to start breathing again, because he didn’t want her to die on his front porch, she was that afraid of him. And then after she gets herself together and leaves Darryl is thinking how brave she’d become, how much “steel” she’d gotten in her backbone. OMG, that was the stupidest thing I’ve ever read. At 50% I wasn’t even sure I wanted to finish this. I can’t stand heroines that are so weak and wimpy for so long. She never got any better. She whined and cried through the whole book.

I was surprised that the hero was from the Aboriginal Australians. I don’t believe I’ve ever read about them in any of my romance novels. LOL, he was described as having skin the color of a “latte.” I thought that was kind of a yummy color.

There were some thoughts from Riley about seeing Kate undressed, and thoughts similar to that. And thought’s from Kate about how handsome he was, but no real sexual tension, which you wouldn’t expect since you know about her childhood, so the amount of sexual tension and sex that was in The Profiler was not anything like that in this book, at least up to 60%.

Of course, there was sex. At about 80%, and then there was 2 or 3 explicit sex scenes during the remainder of the book.

There was swearing and the F-bomb was used 13 times.

I gave it 3 stars for everything about the book except the heroine (she gets 1 star in my book). Toooo much whining for me.

As to the narrators: Noah Michael Levine did a great job on the men and Erin deWard did a great job on all the women’s voices, except for Kate’s. Kate was weak and frightened and Ms. deWard made her sound weaker and even more frightened, Kate sounded pathetic all the time. Also, I don’t understand how these books are based in Australia and the ONLY thing that would make you think that they are is when someone uses the word “mate.” An Australian accent can’t be found anywhere in these books. Knowing that these books are about Australia and the narrators are American I don’t think I’ll continue with this series.

3/5 stars. Grisly murder mystery with a touch of romance. Okay story and characters but it’s a bit odd that Australian characters are read with American accents.

This is the second book in the Munro Family series. Good story. Narration was ok but not great. The previous book was narrated by Aiden Snow. This one is narrated by Noah Michael Levine and Erin Deward. The male narration was good. The female narrator was irritating at times. She tended to over pronounce words and was too shaky on spoken lines and a hoity attitude.

One thing that they did that I liked was that Noah spoke all males lines even when Erin was narrating and vice versa. I wondered why this wasn't done on other books I've heard.

HEA and no cliffhanger.

NO it sounds wrong having American narators read an Aussie book and ruins the story. Who thought it a good idea? A FAIL