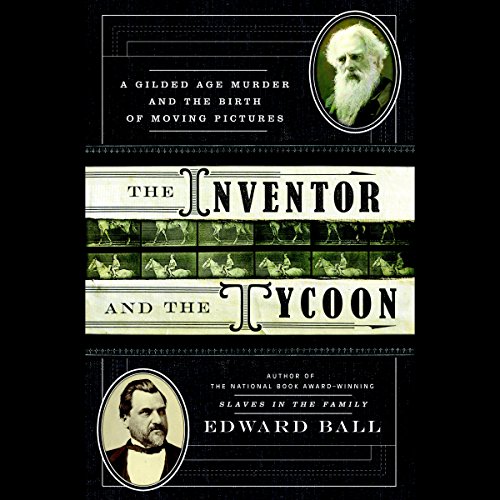 The Inventor and the Tycoon

From the National Book Award-winning author of Slaves in the Family, a riveting true life/true crime narrative of the partnership between the murderer who invented the movies and the robber baron who built the railroads.

One hundred and thirty years ago Eadweard Muybridge invented stop-motion photography, anticipating and making possible motion pictures. He was the first to capture time and play it back for an audience, giving birth to visual media and screen entertainments of all kinds. Yet the artist and inventor Muybridge was also a murderer who killed coolly and meticulously, and his trial is one of the early instances of a media sensation. His patron was railroad tycoon (and former California governor) Leland Stanford, whose particular obsession was whether four hooves of a running horse ever left the ground at once. Stanford hired Muybridge and his camera to answer that question. And between them, the murderer and the railroad mogul launched the age of visual media.

Set in California during its frontier decades, The Inventor and the Tycoon interweaves Muybridge's quest to unlock the secrets of motion through photography, an obsessive murder plot, and the peculiar partnership of an eccentric inventor and a driven entrepreneur. A tale from the great American West, this popular history unspools a story of passion, wealth, and sinister ingenuity.

"National Book Award winner Ball (Writing/Yale Univ.; The Genetic Strand: Exploring a Family History Through DNA, 2007, etc.) returns with a complex story about railroad tycoon Leland Stanford and the murdering man who for a time was his protégé, pioneering photographer Eadweard Muybridge.... A skillfully written tale of technology and wealth, celebrity and murder and the nativity of today's dominant art and entertainment medium." ( Kirkus)

What listeners say about The Inventor and the Tycoon

a challenge to listen to

It took quite an effort to stay with this entire audiobook. The story seemed too broken up and the arc of the story was only tangentially tied to the relationship between the inventor and the tycoon. I never worked as hard to follow an audiobook to the end as I did on The Inventor and the Tycoon.

Would you listen to The Inventor and the Tycoon again? Why?

This is one of the few books I've listened to that I wouldn't repeat. In fact, my iPod turned on in my bag and I missed a bit. I didn't go back. I expected the pace to be equivalent to Muybridge's motion studies and Stanford's horses. Unfortunately, for me, the text plodded. The book was interesting though.

Long time to get started,then the history took ov

Best: the history of the building of the railroad, the history of photography and specifically the history as it related to California and Yosemite. The least: the entire beginning and set up. Contrived.

Do you think The Inventor and the Tycoon needs a follow-up book? Why or why not?

It needs an illustrated version. Cries out for not only Muybridge's photographs but also the paintings mentioned and the other photographers

Would you try another book from Edward Ball and/or John H. Mayer?

No, absolutely not. Book drug on! It was very confusing as it is told out of sequence and you end up hearing the same event multiple times and included way too much irrelevant information. ***spoiler alert*** the author continually mentions this cool and meticulous murder and it is anything but. I kept thinking maybe he killed more than his wife's lover but apparently not. Also, the author continually mentions how the subject changes his name to "unpronounceable" Aedweard Muybridge but the narrator seems to manage just fine. It is also the name of a couple of kings so it is pronounceable and not just a made up name. We can't finish it, Two of us made it through 8 hours (long drive) and can't see how he can possibly drag the story out for another 8!

Would you ever listen to anything by Edward Ball again?

What made the experience of listening to The Inventor and the Tycoon the most enjoyable?

The unbelievable amount of information I did not know.

What about John H. Mayer’s performance did you like?

Just the right tone and inflection

Yes. Luckily I had a hard cover copy, which I kept referring to. A lot is lost without seeing the photographs. Also, narrative was choppy.

If you like history, you'll enjoy this tale of a great railroad tycoon and a cutting edge photographer who helped invent motion pictures. It is a gripping tale

What made the experience of listening to The Inventor and the Tycoon the most enjoyable?

The story was filled with twists and turns as well as surprising historical information,

Mybridge or what ever he's calling himself at the moment. He was inventive and creative while somewhat eccentric.

Which character – as performed by John H. Mayer – was your favorite?

Edward's reaction to learning of his wife's dalliance and his plans to deal with her lover.

I expected this book to be a work of fiction; I guess I failed to note that when I selected it that it was a true story. The entire story about the growing of America, the railroads, the advent of motion pictures and the founding of California and Stanford University kept me wanting to hear more.

If you could sum up The Inventor and the Tycoon in three words, what would they be?

This is one of my favorite history books I have 'read' in the last few years. It has a similar style to "The Professor and the Madman" which I also loved. Definitely great insights into the beginning of movies, the founding of Stanford University, and life in California in the late 1800s. Muybridge was certainly an odd character but so were many from the period (e.g., Edison, Leland Stanford, and the railroad men of the time.
It does jump around in time from chapter to chapter, but I got used to that. Definitely, a worthwhile bit of history.