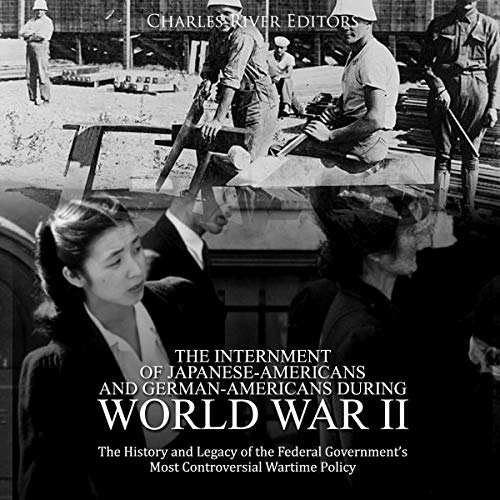 The History and Legacy of the Federal Government’s Most Controversial Wartime Policy
By: Charles River Editors
Narrated by: Colin Fluxman
Length: 2 hrs and 54 mins
Categories: History, 20th Century
5 out of 5 stars 5.0 (1 rating)

The internment of Japanese Americans in the wake of the attack on Pearl Harbor is second only to slavery in terms of America’s most tragic and regrettable chapters in history. While the forced relocation and internment of Japanese Americans living on the West Coast during the Second World War is widely recognized - they have even received apologies and compensation from the US government - what is not as well-known is that between 1941 and 1948, approximately 10,000 Americans of German descent were also forcibly interned at camps scattered across the United States.

Some refugees who had fled from Germany, in an attempt to escape Nazi persecution, were rounded up, interned, and later used in a prisoner exchange program between the United States and German governments. The American government also went to great lengths to secure Germans living across Latin America, who they believed posed a tangible threat, should they cross America’s southern border.

In spite of a preponderance of evidence affirming the occurrence of these events, the United States government persistently denied it for decades. The public was largely unaware that these atrocities had occurred, and hardly a single account of history was found to mention them. Winkler, for instance, fallaciously asserted that “German-Americans, treated poorly by their fellow Americans during World War I, were now more fully assimilated into American life and were largely left alone”.

With the Freedom of Information Act (1967) opening up government archives regarding these events, new facts emerged pertaining to German-American internment during World War II. More recently, personal testimonies by survivors of internment camps have led historians into the open archives in an effort to corroborate their stories. But even after these events have been firmly established, they continue to be overlooked both in popular discourse and by historians of the era.