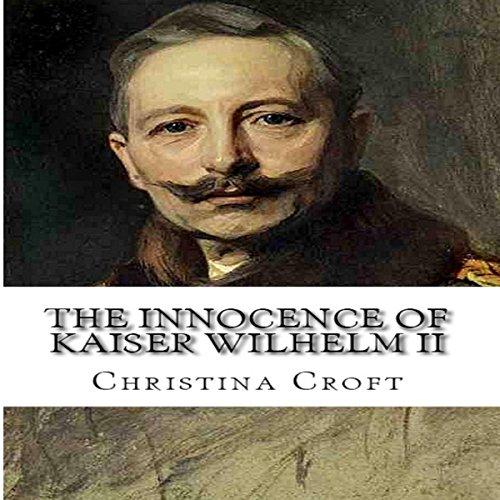 The Innocence of Kaiser Wilhelm II

By: Christina Croft
Narrated by: Jack Wynters
Try for $0.00

Almost a century after the signing of the Treaty of Versailles, Kaiser Wilhelm II is still viewed as either a warmonger or a madman, as the hundred-year-old propaganda posters remain fixed in the general consciousness. Was he, though, truly responsible for the catastrophe of the First World War, or was he in fact a convenient scapegoat, blamed for a conflict which he desperately tried to avoid?

What listeners say about The Innocence of Kaiser Wilhelm II

Really make you re-think what your were told

The audio performance was great, I like the change of accents by the narrator. Overall the book it's self was very interesting. I kind thought it was going to be a overly slanted affair in reverse, all in the Kaiser's favor. However, She is not afraid to call him out when he was wrong. However, since so much of history seems based more on propaganda from the time, and the winners writing history, the author is faced with an up hill battle. This forces the bulk of the book making the case in the Kaiser favor which it does well, supported and countered with well thought out examples. Sure some of the examples are likely spin or or propaganda from the time that was in the favor of the Kaiser, but on the whole, there are a lot of facts that seem to be on his sides and Christina Croft does a great job making the case.

The book makes me want to learn more. I am not going to say this 100 percent convinced me, and not blaming Croft but after 100 years it is interesting to get a different perspective. I am not ready to say the Kaiser and Germany were innocent or did not make some mistakes, but at the same time did Britain really want to go to war out of their love for Belgium, or France who had to go war because of a treaty with Russia, who was going to war over a dispute over Serbia with the Austrians, so was France really willing to risk it's nation over that? Wilson who was going to make "the World Safe for Democracy" but in the end abandon his deal with Germany and allowed the victors to take their spoils and continue their reign over their colonial subjects. There has to be more to it, and maybe this does explain some.

While this was a good book with a good narrator. Some facts (one in particular) were simply not true. For example, the easter rising in Dublin in 1916 was not carried out to support the concept of home rule, but complete independence for the island of Ireland from the tyranny if the UK. Also the subsequent executions of the leaders DID NOT galvanise support in Ireland for the allies war effort. In fact it resulted in a war of independence which resulted in the partition of the island. Other than this poor use of historical facts, the book was a good listen.

the real history behind ww1

This book is the best I've read on the real causes and players behind ww1. And by listing to this book you will find out how this horrible war really started.

History is not as it seems

History is written by the victor is a statement as old as Time. In the crusade against the fatherland his Imperial Majesty was labeled a tyrant to hide the actions of a malevolent force from international finance and global liberalism. May you rest in peace even though the world spits on your grave

This story is really an eye-opener. Casts Wilhelm II in a whole new light. Informative

What did you love best about The Innocence of Kaiser Wilhelm II?

The details that are overlooked in standard histories of World War I. It's that much more fun that a few of them are Internet myths or were even made up by the author. Don't miss the part about the French poison gas with the English name Turpinite.

Woodrow Wilson, who doublecrossed the Kaiser. He is the bad guy in this story.

What does Jack Wynters bring to the story that you wouldn’t experience if you just read the book?

The sneering way he reads the snotty comments from the author and various historical figures. I was almost ready to vote against President Wilson in the next election.

The Kaiser, in retirement, blaming World War I on the freemasons.

I look forward to trips to the grocery store because I can read the headline in the Inquirer while I'm waiting for checkout. I think that's why I liked this book so much. Meet Kaiser Bill, the nicest autocrat in Europe, beloved by all except for Germany's neighbors. Like many other leaders, he talks incessantly of his desire for peace, but he really means it. He made only two mistakes, however: he allied himself with some Austrian thugs who murdered the heir to their own throne, blamed it on a terrorist organization that had been dormant for a decade, and dragged Bill into a world war against all his best efforts. His second mistake was to preside over a government that never gave straight answers to his questions and ignored his decrees. It's not easy being the All Highest.

As a Millennial I believe I had looked on this time in history (until I studied it at a level and then further at degree level) as a time when Germany were persistently "the bad guys" for whatever reason. I suppose this opinion was relatively all lumped together as here in the UK we have always seen ourselves as 'the allies', the side of good. while during the second world war there is certainly good reason to suppose we were fighting something very sinister, this reflection on kaiser Wilhelm in his own time with his European familial connections certainly over turn such an uneducated view. This book is a very good reflection of the kaiser's life and does well to show that he is not the monster the Allies made him to be. Although this is only one such source on the topic it is well worth a listen!

Great narrative, not sure about narrator

The story of Kaiser Wilhelm is a compelling one and is well worth the read. However, I found the narration annoying. A slavish adherence to pauses after commas had me listening out for the next occurrence and not to the story.

The only book i've gave up on

He was and probably still is portrayed to be the bad guy in the story, however this book makes him out to be the most kindest gentlest man who ever walked the planet.

It seems every point narrated goes like this "Wilhelm was accused of doing X, but infact Wilhelm was doing the opposite of X".

Theres only so much of that I could listen to. I have given up with 2 hours to go.

the best thing I've ever heard on the real causes of the first world war. a moving portrait of a man and a time and a world. delivered everything and much more than I expected. superbly read. full marks.

Great narrative and truly eye opening account from an under served pint of view. This rehabilitation of Wilhelm may raise an eyebrow for many, but it deserves serious examination by those who continue to be interested in who the catastrophe of the Great War was allowed to happen. My only gripe: I’m sure the author means ‘specific’, no ‘pacific’.

To me it's a great book!

Sometimes to you need read to different point of view. But I love this book!!!

Unexpected point of view that is worth listening too. One is left with the deep realization of tragedy surrounding this Kaiser and the German people. the culprits have killed millions and got away with it. we all know who they are but they can't be mentioned.