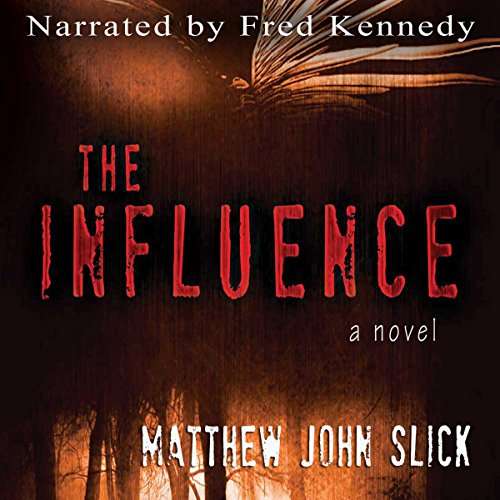 By: Matthew John Slick
Narrated by: Fred Kennedy
Free with a 30-day trial

Mark is in his garden, grieving and depressed over the unexplained death of his son and without knowing it, is almost coaxed by a demon into committing suicide. But, at the last moment, Sotare, an angel, rescues him and is later permitted to appear to Mark in the Garden. The two dialogue about God, life, death, good, evil, the spiritual realm, and the nature of truth. However, all is not well. The demons are watching and powerful evil forces are sent to kill and destroy those who are close to Mark and those who are praying for him. As Sotare teaches Mark, he is given answers to his questions - but they do not come easily. He must face his greatest challenge in order to learn his greatest lesson. The battle over Mark unfolds in both the spiritual and physical worlds as angels are sent to battle against the evil forces that are seeking to destroy. True victory is never easy.

What listeners say about The Influence

If you could sum up The Influence in three words, what would they be?

This is a must read for anyone who wants to understand the call of God and the spiritual realm activities! Many deceptions take place in our world but this book breaths life and brings a great reminder of the daily battle over our souls and who is the ultimate power!

Can't wait for the sequel!!! Couldn't stop listening! This is by far one of the best if not the best audiobook I've heard. To God be the Glory!

He gave a great story. It really makes you think. It gives biblical and logical reasons to believe in Jesus.

Wonderful story and well narrated. It really drove home and illustrated the reality of spiritual warfare. This book really opened my eyes!

What made the experience of listening to The Influence the most enjoyable?

I know that there is a spiritual warfare going on...this author has created such a story that draws you in and really causes you to take pause and examine your own relationship with Jesus, At the same time you are on the edge of your seat waiting to see what happens to these very relatable characters.

What other book might you compare The Influence to and why?

Most definitely Frank Peretti's books, This Present Darkness and Piercing The Darkness....if you liked those you will love this one!

What does Fred Kennedy bring to the story that you wouldn’t experience if you just read the book?

I love Mr. Kennedy's narration. He is exceptional. I especially love the pastor's voice, sounds just like Gregory Peck's!!

There were several moments throughout the book that were very intense and gripping. Others that really made me cry. Just a great listen, a really good story.

Spiritual Warfare fiction needs to be a thing!

Not since The Screwtape Letters have I read such a biblically accurate tale of the behind the scenes battle for our souls.

This story is fiction, and yet it holds more truth than some of those popular so-called non-fiction near-death experience books (such as The Shack and other such new age garbage).

Very good book. Very captivating story and very insightful. I don't think I will ever think of what may be around me the same way again. :-)

This audio book is right up there with "This Present Darkness" and Piercing the Darkness" by Frank Peretti, as a matter of fact, it may be my favorite of the three!! It really makes you think about the spiritual battle being fought daily for our souls.

WONDERFUL ! I WILL KEEP IT FOREVER.

In a time of great sorry this book gave me comfort and perce. God's Love does cover all our Sins. Thank you for writing this book. God has give you a great gift to show people how much God's love can Forgive ,Heal, and Save.

Slow start to a great story

First, not only is the reader excellent, but so we some sound enhancements. Writing we at times a bit preachy and peachy, but there were a lot of wonderful "ponder points" even for maturity Christians. Non-Christians with questions will appreciate various arguments made from view point of the characters of Mark and his wife. As a believer, I came away from this read with reminders of God's live for me & that He has set angels to watch over us - even when we *feel* unloved and unprotected.

I found this very Interesting. knowing that there really is battles of Angels and demons going on in the world.