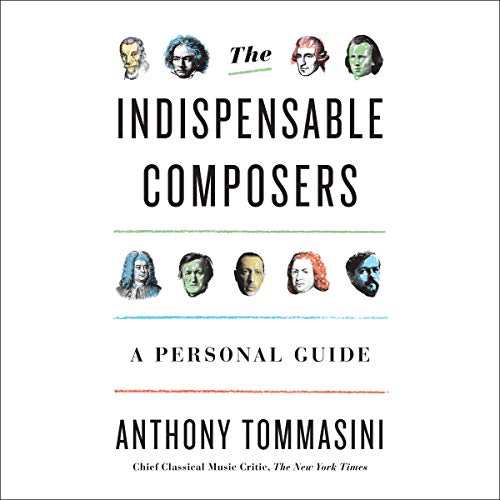 By: Anthony Tommasini
Narrated by: Mark Bramhall
Try for $0.00

An exploration into the question of greatness from the chief classical music critic of the New York Times.

When he began to listen to the great works of classical music as a child, Anthony Tommasini had many questions. Why did a particular piece move him? How did the music work? Over time, he realized his passion for this music was not enough. He needed to understand it. Take Bach, for starters. Who was he? How does one account for his music and its unshakable hold on us today?

As a critic, Tommasini has devoted particular attention to living composers and overlooked repertory. But, like all classical music lovers, the canon has remained central for him. In 2011, in his role as the chief classical music critic for the New York Times, he wrote a popular series in which he somewhat cheekily set out to determine the all-time top 10 composers. Inviting input from readers, Tommasini wrestled with questions of greatness. Readers joined the exercise in droves. Some railed against classical music’s obsession with greatness but then raged when Mahler was left off the final list. This intellectual game reminded them why they loved music in the first place.

Now, in The Indispensable Composers, Tommasini offers his own personal guide to the canon - and what greatness really means in classical music. What does it mean to be canonical now? Who gets to say? And do we have enough perspective on the 20th century to even begin assessing it?

To make his case, Tommasini draws on elements of biography, the anxiety of influence, the composer's relationships with colleagues, and shifting attitudes toward a composer's work over time. Because he has spent his life contemplating these titans, Tommasini shares impressions from performances he has heard or given or moments when his own biography proves revealing.

As he argues for his particular pantheon of indispensable composers, Anthony Tommasini provides a masterclass in what to listen for and how to understand what music does to us.

“[Tommasini] defends the value of distinguishing the great from the merely good.... Tommasini does a fine job of conveying the inner life of a piece, through his rhythmic sentences and sculpted paragraphs.... One cannot help coming away from it with a more rounded understanding of classical music at its peak.” (Phillip Lopate, New York Times Book Review)

“A pianist himself, Tommasini infuses his essays with insights from a lifetime of playing and listening.” (San Francisco Chronicle)

“A spirited musical compendium to the best of the best.... [Tommasini’s] goal is to keep his assessments simple, insightful, and jargon-free, and he succeeds.... Entertaining, highly enthusiastic, and very knowledgeable, he’s the perfect guide [to the great composers]...all exuberantly presented for your edification and enjoyment.” (Kirkus)

“Insightful...Tommasini twines engaging biographical sketches of the maestros and their tragic ailments, love affairs, and endless scrambles for money with appreciations of masterpieces, the latter enriched by his memories of hearing and performing them...he excels at the difficult task of capturing music in words.... The result is an engrossing study that will appeal to both classical music aficionados and novice listeners who want a road map.” (Publishers Weekly)

What listeners say about The Indispensable Composers

I love music history and have read so many books on it. This one caught my eye with the catchy word “indispensable.” Well just try and guess who the “indispensable” composers are. Spoiler here. THE SAME ONES YOU READ ABOUT IN EVERY OTHER BOOK ABOUT GREAT COMPOSERS. The thing that makes them indispensable is the same thing that makes them great. Sorry to say I didn’t learn much from this book Same old stuff. Except for who might possibly be gay. There’s the catch-phrase.

Not sure I understand the significance of any of these people. It could have been more interesting

You just can’t have an audio book about the great composers that doesn’t include musical excerpts. What an oversight.