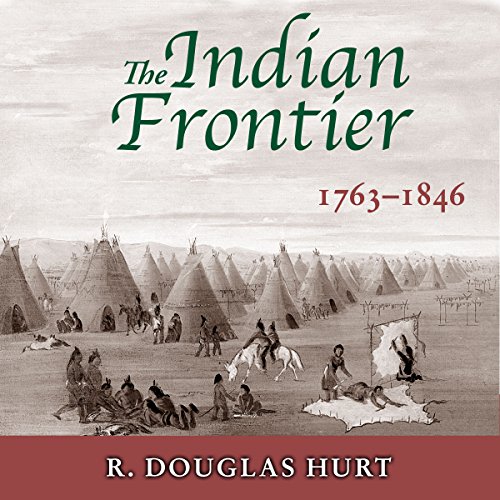 The Indian Frontier, 1763-1846 (Histories of the American Frontier)

By: R. Douglas Hurt
Narrated by: Fred Filbrich
Try for $0.00

This synthesis of Indian-white relations west of the Appalachians from the end of the French and Indian War to the beginning of the Mexican War is not simply a story of whites versus Indians. The term "whites" encompassed British, Spanish, and American settlers and governments, and the hundreds of Indian tribes who opposed them were no more unified than their European colonizers. The author focuses on relations among the British, the Spanish, the Americans, and Indian tribes in territories claimed by more than one of these groups, with particular emphasis on Indian tribes' pursuit of trade, peace, and guarantees of their land. Self-interest motivated all the players in these complex interactions, and when irreconcilable differences inevitably resulted these were settled by force.

The broad chronological and geographical scope of this volume encompasses British efforts to enforce new settlement policies after their defeat of the French, the Spanish system of missions and presidios, trade in the Columbia River basin of the Pacific Northwest, the Indian Removal Act and the Trail of Tears, and the establishment of a strong military presence to defend the trade routes of the Great Plains. The author's clear explanations of complex negotiations over trade, land, and policy among countless conflicting groups during a period of transition will be invaluable for students and for the interested general listener.

"One of the best history books of the year." (Library Journal)

"Hurt has done an admirable job of synthesizing the complex history of Indian versus non-Indian in the US." (Book News, Inc.)

"Hurt's masterfully written synthesis should appeal to the general reader . . and prove invaluable to students and specialists in the field."(The Historian)

What listeners say about The Indian Frontier, 1763-1846 (Histories of the American Frontier)