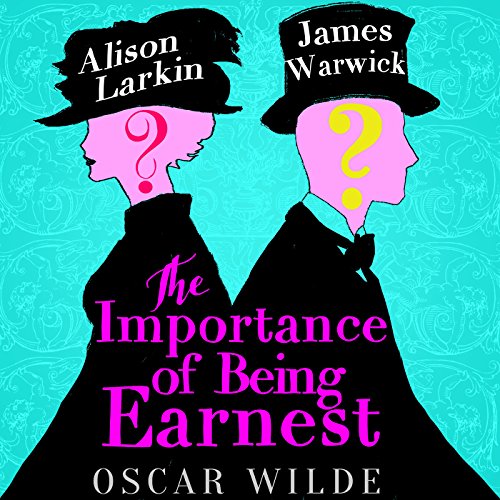 By: Oscar Wilde
Narrated by: Alison Larkin,James Warwick
Try for $0.00

TV star James Warwick and award-winning narrator/comedienne Alison Larkin star in this accessible, dazzlingly funny two-actor production of The Importance of Being Earnest--a trivial comedy for serious people. We're in England in 1895. Algy and Jack are debonair bachelors-about-town who plan to court Gwendolen and Cecily, despite opposition from the formidable Lady Bracknell. Jack was adopted as a baby, and discovering the truth surrounding his mysterious origins becomes critical to his future happiness.

This co-production between Alison Larkin Presents and Steven Jay Cohen is unique in that it is the first full cast audio production performed by two people.

James Warwick is most famous for his starring roles on television including Tommy in Agatha Christie's Tommy and Tuppence series on PBS for Masterpiece Theater. He has also played many leading roles on Broadway and in the West End, originating the role of Brad in the Rocky Horror Show, playing King Arthur in Camelot. His last Starring role in an Oscar Wilde play was in Peter Hall's Production of The Ideal Husband on Broadway.

Alison Larkin is the award-winning narrator of over 150 audiobooks, an internationally acclaimed comedienne and the bestselling author of The English American, a novel. Hailed by The Times as hugely entertaining and by AudioFile magazine as unparalleled--a narrator to seek; she is in her element playing all the women in Oscar Wilde's most famous play.

What is arguably Oscar Wilde's most popular work has stood the test of time as a classic comedy. In this new audio edition, narrators James Warwick and Alison Larkin take on the roles of all nine characters. Both performers expertly create unique personalities for all the roles, showing the extent of their talents. Even with only two actors at work, it's nearly impossible to confuse the characters except where Wilde intends. As the characters indulge in high jinks, Warwick and Larkin are a delightful combination--for listeners familiar with the story and newcomers. Get ready to listen and laugh as Wilde's classic comedy comes to life once more. ( Audiofile Magazine)

What made the experience of listening to The Importance of Being Earnest the most enjoyable?

I think the fact that though there are only two actors playing all the parts it sounds like an entire cast and it's so so so so funny!

What other book might you compare The Importance of Being Earnest to and why?

I saw James Warwick in The Ideal Husband on Broadway and was so excited to discover this fantastic audio production of The Importance of Being Earnest! I'd compare it to any other Oscar Wilde play - and also to Agatha Christie's work, which both Alison Larkin and James Warwick have narrated - Larkin narrates The Secret Adversary and Warwick narrates The Mysterious Affair at Styles which is the first Hercule Poirot.

What about Alison Larkin and James Warwick ’s performance did you like?

Both know how to do comedy. Straight. For real. Lightly. It's impossible to pick just one thing - these are, quite simply, authentic, brilliant performances.

Yes! The end when Jack finds out who he really is!

A great classic performed by two comedic actors at the top of their game. A must-listen for fans of Oscar Wilde.

The Importance of Being Earnest - GREAT VERSION!!

Where does The Importance of Being Earnest - edited by James Warwick and Alison Larkin rank among all the audiobooks you’ve listened to so far?

I love this play - it is Oscar Wilde's masterpiece - and Alison Larkin and James Warwick have created the perfect audiobook version. It's incredibly well performed and funny as anything!! I put it in the top five of all audiobooks I've ever listened to!

The characterizations are spot-on and the story with all its complex plotting moves quickly and hilariously!

Have you listened to any of Alison Larkin and James Warwick ’s other performances before? How does this one compare?

Well, Alison Larkin has done just about all of Jane Austen's work and she's perfect. I know James Warwick from Masterpiece Theater on public TV, really

No, it just all flows beautifully. The very ending, I guess, it just wraps everything up with a neat bow.

If you have never heard "The Importance of Being Earnest" before, or seen it in a theater, I envy you because you are about to listen to one of the most fun audios ever!

If you could sum up The Importance of Being Earnest - edited by James Warwick and Alison Larkin in three words, what would they be?

Have you listened to any of Alison Larkin and James Warwick ’s other performances before? How does this one compare?

I plan on listening to any performances from these two marvelous narrators. Each of Wilde's characters is amusingly brought to life through this witty and charming performance by Mr. Warwick and Ms. Larkin. A must listen!

I am recommending this audiobook to all my friends.