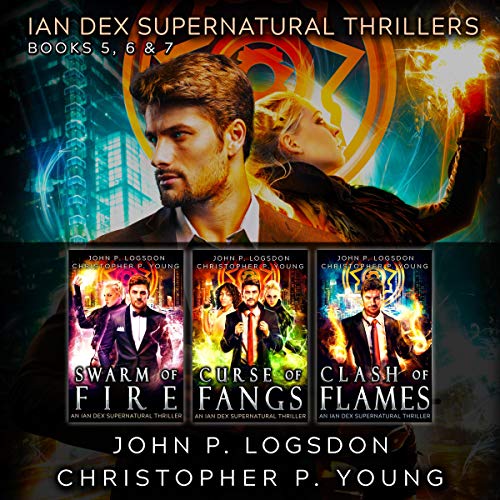 A foulmouthed pixie has hit the streets in Vegas to stir up trouble. He's tiny, angry, and full of magic dust. His primary goal is to wreak as much havoc as possible on the tourists and casinos. Ian Dex and the crew of the Las Vegas PPD have to track down the little bastard and stop him.

The problem is that the pixie can create the most terrifying monsters out of thin air. His creations include Bigfoot, the Abominable Snowman, the swamp ape, and worst of all...Barney the dinosaur. They're scary, deadly, and kind of cute.

Will Ian be able to stop the miniature megalomaniac before it's too late, or will the Vegas Strip fall under the rule of a flippin' pixie?

When vampire venom mixes with Las Vegas Paranormal Police Chief Ian Dex, he gains access to power like he's never known. The problem is that he's becoming too powerful. That makes him a target.

The venom is also making him grumpy, demanding, and dark. Unfortunately, Rachel Cress is finding his newfound brooding angst to be rather sexy indeed, and that only makes things worse.

But the vampire has infected more than just Ian Dex. His venom is surging through supernaturals all over the Vegas Strip. An army is brewing.

To stop the spread, Ian and his crew have to find the dude responsible and take him down. With the fate of the Strip hanging in the balance, failure is not an option.

There's something more about the venom, though, and it's making things tough on Ian. What's different? It's the mind-control type.

Four amalgamites are searching for their brother, and they're willing to kill the cops in the Las Vegas PPD to get to him.

The problem is that there's only supposed to be one amalgamite in existence: Ian Dex.

It quickly becomes apparent that four like him could easily overpower his crew, so he does the only thing he can think of to ensure their safety. He tricks them. But Ian knows the amalgamites will hunt them down unless they're well-hidden.

Unfortunately, he can only think of one place they'll be safe: Hell.

On the plus side, that means he'll get to train with those sexy Netherworld dwellers known as the valkyries. Silver lining. Too bad they're intent on kicking the crap out of him as he prepares for the final showdown.

Will Ian be able to protect his fellow officers, the Vegas Strip, and himself...or has he finally met something beyond his capabilities? And is there something more to all of this that will shake Ian's world to the core?

We werent quite ready to let go of the characters and are ready for the next book/set in the series! Now to find something else to listen to while we wait...

An extremely fun and hilarious series

I loved this. It made me laugh so much. Extremely fun and light even with all the excitement and fighting.

I love all your books John.wish they could be made into a Netflix show.you guys rock

God I hope they write more of this story soon! I haven't laught so hard over a book before in my life.

Great story loved the humour, highly recommended. Ian Dex and his crew are great together. hopefully more in series soon

So this audio from the books 5 to 7 is well worth it and we see even more from Ian and his team and i think even narration gets a tad sharper and and on point.
The story brings a nice conclusion to this story arc with i hear even more to follow soon.
Laugh , Cry as we have come to the end ,or just chuckle with fond memories i enjoyed this a lot and its made me even happier to explore more from the strange world of PPD whilst i await more Dex stories.

loved it, easy listening and good fun, not for the easily offended, chuckled quite alot

Poor narrator sounds like she's using a cheap 1980's cassette recorder with a built in mic. Damn shame because the audio quality of the Ian Dex books is excellent. However the narrators excelent reading and the engaging story will allow me to finish the book and enjoy it.

The first collection of these novels were diverting and actually had an overall arc and a story.
This collection feels like a self indulgent meander where two stoned teens sit around and ponder their fantasies. The lead character went from being a bit of a 'jerk' - as he described himself to just a total sleaze and the story went by the way-side.
I'm afraid I just gave up on the whole thing during the last novel, where it just got toooo silly even for my rather silly sense of humour.

However I must say the author/narrator is excellent.