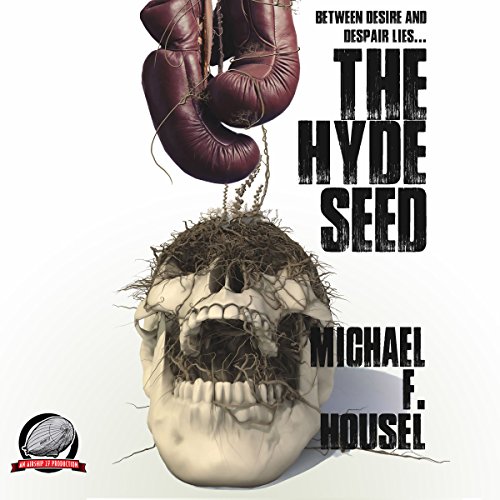 At one time, boxer Pepe Rodriguez believed his only opponents were the men he faced in the ring. But when his own self-doubts derail his boxing career, Pepe soon learns to understand one's own personal demons are the most deadly foes of all. Years later, they return to once again threaten any chance he has of real happiness and contentment. In the end, he will have to endure one final bout against his darker side, or risk losing his soul to despair forever.

With Hyde Seed, writer Michael Housel delivers an insightful cautionary tale about the duality of life and the struggles all of us must face in one way or another.

The duality of man.

We all have two sides but this story dramatizes the opposing forces of one man and how it affects his life.

The details are of course for the listener to discover with the help of a very good performance by the Narrator.

Battle of Good vs. Evil

I received this audiobook for free from the author or narrator and give my unbiased opinion willingly.

There are many things to like about this story. First, it held my attention with lots of suspense. From the first chapter on I wanted to keep listening to find out what happened to Pepe. The main character was a guy that you really wanted to like - in spite of all the adversity he faced. Additionally, there are characters that you come to loathe in the story - both real and especially the alter ego of Pepe - the side of him that wanted him to quit and throw in the towel (to borrow the boxing theme). In many ways it reminded me of some of the Greek tragedies. I'll not spoil it for you though by telling you the outcome. I especially appreciated how Mr. Housel used lots of imagery and metaphor - especially the garden.

Mr. Glennon did an ok job narrating. Some of his character voices were especially good. I think he will get even better as he works on his pacing. One technical note: in some of the earlier chapters it sounded like an artificial gate was used to reduce noise between the phrases and it was a bit jarring to the ear. It got better as the story went on.

I quite liked this one, even if it's different than the author's Flask of Eyes or The Persona, though it did remind me a little of his Bog Demon story in Devolution Z #1. Hyde Seed is essentially the story of a man battling his personal demons. I guess one could say it's symbolic of the hard times people sometimes face. Anyway, the story is short, bittersweet and kind of neat. It has beautiful illustrations that give the layout a nostalgic look and what a grabber of a cover! The story is definitely worth reading for those who might like a Rocky Balboa and Jekyll-and-Hyde kind of thing.

This was a short but entertaining story. Hyde Seed was kind of a story of a guy battling his inner demons. Good versus evil but not so one sided. The narration was decent. Wasn't the best I've ever heard but certainly good enough to make for an enjoyable listen. Definitely made me think.

drawn out but ok. followes life of former boxer and the trials that come with the fall

Scott Glennon does a terrific job bringing the story to life. The ending, per the pacing of his vocalization, gives the text a real &quot;Rocky&quot; climax feel.