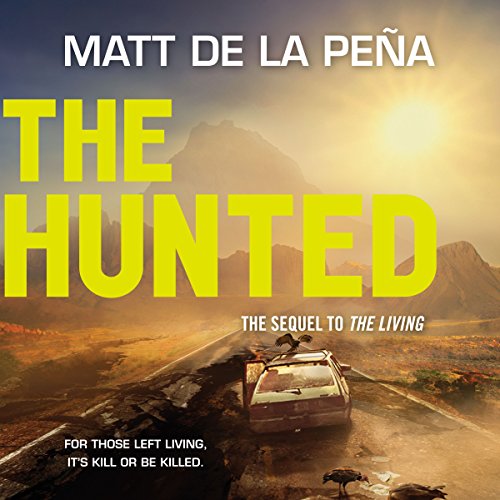 Newbery Medal-winning author Matt de la Peña's The Hunted, the sequel to The Living, is a high-energy, action-packed survival story.

"De la Peña has created a rare thing: a plot-driven YA with characters worthy of a John Green novel." - Entertainment Weekly on The Living, A-

For those left living, it's kill or be killed. When Shy pulled himself from the wreckage of the Paradise Cruise luxury liner, he met Addie. Addie was rich and blond, and with no one else to trust, she told Shy a secret she never should have revealed.

It's a secret that people would kill for - have killed for - and she has the piece that could turn everything on its ear. The problem? Shy has no idea where Addie is. Back home in California seems logical, but there are more ways to die back home than Shy could ever have guessed. And thanks to what Shy knows now, he's a moving target.

"Readers will be drawn to the raw and gritty setting, fast-moving plot, and diverse characters worth rooting for." ( School and Library Journal)
"Between [the] fast-paced plot and meaningful, diverse character development, this is a great crossover for fans of both thrillers and more character-driven novels." ( Booklist)

What listeners say about The Hunted

a good conclusion to this mini series