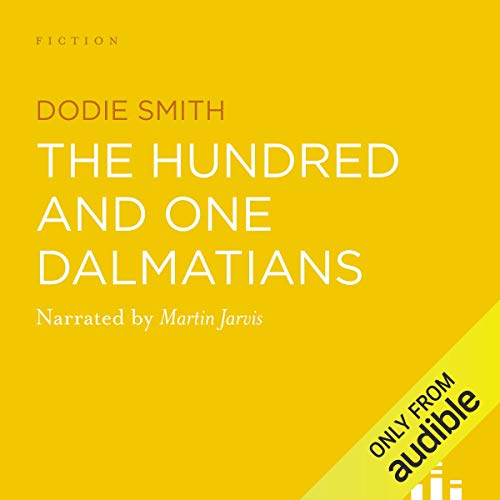 The Hundred and One Dalmatians

By: Dodie Smith
Narrated by: Martin Jarvis
Try for $0.00

Pongo and Missis Pongo are a pair of Dalmatians who live with the newly married Mr. and Mrs. Dearly and their two nannies. Mr. Dearly is a "financial wizard" who has been granted life-long tax exemption and lent a house on the Outer Circle in Regent's Park in return for wiping out the government debt. The dogs consider the humans their pets, but allow the humans to think that they are the owners.

Missis gives birth to a litter of 15 puppies. Concerned that Missis will not be able to feed them all, Mrs. Dearly looks for a wet nurse, and finds an abandoned Dalmatian mother in the middle of the road in the pouring rain. She has the dog treated by a vet and names her Perdita.

Mr. and Mrs. Dearly attend a dinner party hosted by Cruella de Vil, an intimidating and very wealthy woman fixated with fur. The Dearlys are disconcerted by her belief that all animals are worthless and should be drowned. Shortly after the dinner party, the puppies disappear. The humans fail to trace them, but through the "Twilight Barking", a forum of communication in which dogs can relay messages to each other across the country, the dogs manage to track them down to "Hell Hall", the ancestral home of the de Vil family in Suffolk.

Pongo and Missis decide to run away from home and find them, leaving Perdita to look after the Dearlys. After a journey across the countryside, they learn that there are 97 puppies in Hell Hall, including their own 15.

Thus commences a determined attempt to rescue the Dalmatian puppies quickly before they end up as fur for one of Cruella de Vil’s famous black and white fur coats.

"Martin Jarvis continues to bring the classics of children's literatue to new audiences with a reading of Dodie Smith's dognapping adventure every bit as enjoyable as his Just William series" ( The Daily Telegraph)
"Fun as the film was, it did not do justice to the cascade of wit and jokes that flows from Dodie Smith's pen in the novel....like Peter Pan, this is a book that will be as much enjoyed by parents as children." ( The Independent)

What listeners say about The Hundred and One Dalmatians

A lot of fun

Don't let the fact that this is supposed to be a children's book stop you from listening to this entertaining and well written story. The narrator does a great job of voicing all of the characters in a believable fashion.

I downloaded this for a 4 hr road trip with my 4 yr old niece - I didnt get "are we there yet" once! She listened to the entire book and loved it. Well narrated.

Who Knew this Book was so Good?

Would you consider the audio edition of The Hundred and One Dalmatians to be better than the print version?

I never read the print version but the audio was great as a thing to listen to as a family with my 9 and twelve year old daughters.

The story is told with nice understated humor throughout. Both I and my children got some good laughs.

The story moves crisply and brings you into the dogs-eye view of the world in a terrific way. This was a real delight.

Wonderful listening for the whole family

We listened to this story on a long car trip and it kept our entire family entertained. My seven-year-old had read the story twice before so she was familiar with it, but our five-year-old heard it for the first time. My husband and I found ourselves chuckling in the front seat as we listened. Well worth the money spent to have us all happy during the trip!

A hit with the kids

This was a hit from begining to end. The story was well narrated, clear and easy to follow. My two children, aged 5 and 8, were riveted, and so was I!

OVER 60 MILES AS THE DOG BARKS

MOST USUAL DOGS ARE MORE UNUSUAL THAN UNUSUAL DOGS.
What a wonderful story. This is not a Disney Movie made into a book, but a 1956 book that was adapted into a movie in 1961. It is extremely well written and can be enjoyed by the whole family. At times it is laugh out loud funny. I found the General, to be extremely funny. Dog owners will love it the most.

THE SIZE OF ALL BREEDS SHOULD BE KEPT UP
Since it was written in 56 and even though it was written by a woman, there are some noticeable sexist remarks. The mother dog, is referred to as Mrs., while her husband has a name, Pongo. Mrs. can't tell her right from her left and the male dogs think, that is cute. The male pups struggle bravely, but the female pups, just can't go on. With that exception, I recommend this book, highly. It is entertaining, fun and intelligent.

S.O.S, SAVE OUR SKINS
Narrator does an excellent job

When I was a child, I would check out this book from the school library so many times I lost track of counting. Trough
troubled times, it was my anchor to a better world.

A precious story of parents' love

Listened to this book right before Christmas with my tween son, not realizing it is actually a Christmas story. He loved the adventure of Pongo and Mrs. and he did a great job of predicting what was going to come next and putting the clues together along the way, it was a precious gift to share with him. I enjoyed the story as well, knowing the characters only from the clips I've seen of the Disney movie and was surprised that the physical description of Cruella De Ville were spot on to how she is described in the book. Will probably use the winter break to watch the movie with my son to wrap it all up.

So much better than the movie!!

Martin Jarvis is one of my most favorite narrators! They list to say he brought this lovely story to life!

Amazing narrator. Awesome story and so well told I loved the book so so so so so much please read

A beautiful book beautifully read. It kept both adults and children happily entertained all the way down to Cornwall recently. Although the rough plot line will be familiar to most families from the Disney film the book is subtler and more carefully plotted. There are wider range of characters, both canine and human, and the dogs' final revenge upon Cruella de Vil is both viscerally exciting and absolutely fitting to her planned crime. My 7 year old son said it was 'fantastic' and we are now reading the book itself. A great way to introduce children to the stories behind the simplified Disney films.

I really enjoyed this. OK, OK, I know it's a children's book but after reading "I Capture the Castle" by the same author I just fancied it. The story is much more childish than ICtC of course, but it is surprisingly good and the narration is top-quality.

This is my favourite book from my childhood. It has been excellently read by Martin Jarvis, and he portrayed each character's voice brilliantly. A joy to listen to.

My son really enjoyed this story, he is 6 years old and has seen the Disney film so was aware of the characters and the plot line. We particularly liked how the story is told from the dogs point of view which brings a certain humour to the narration. Recommended for all children of this age range as an easy to follow story.

A joy to listen to, but it shows its age

I love this story and MJ brings it to life beautifully. However, coming back to it as an adult, the blatant sexism made me wince on several occasions. I have no doubt I'll listen to this again, but there are some scenes I'll skip over in future.

took me right back to my childhood and the first time I ever heard the story loved it.

I liked the story telling and disliked nothing!
Listen/to/this/NOW!

Just the best thing ever

You wanna relax? Go for this
Big up Pongo and Missus
🤸‍♂️

It's a good story, endearing perspective and an uplifting story about full or love. The narrator was clear and pleasant to listen to.

Have loved this story since I was a child.

Some strange pronunciation by the narrator was a bit off-putting.. Per-DEE-ta?