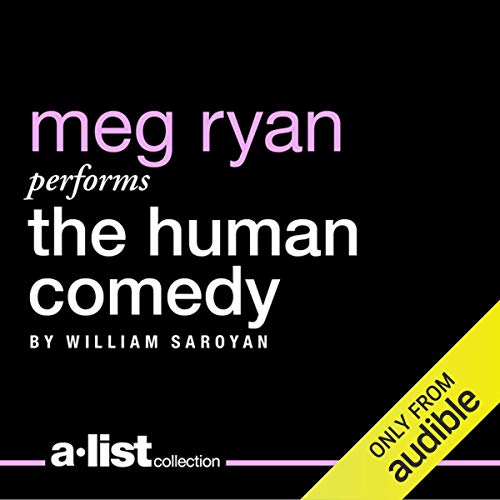 By: William Saroyan
Narrated by: Meg Ryan
Try for $0.00

The story of The Human Comedy, poignant and richly autobiographical, is based both on author Saroyan’s fatherless life and the Greek classic Homer’s Odyssey. Beloved actress Meg Ryan shows us the boy becoming the man in a world that, even in the midst of war, appears sweeter, safer, and more livable than our own.

In World War II-era California, Homer Macauley and his mother, sister, and three brothers live out struggles and dreams that reflect those of America’s second-generation immigrants. Homer, determined to become one of the fastest telegraph messengers in the West, finds himself caught between reality and illusion as delivering his messages of wartime brings him face-to-face with human emotion at its most naked and raw.

Explore more titles performed by some of the most celebrated actors in the business in Audible’s Star-Powered Listens collection.
©1943 William Saroyan (P)2012 Audible, Inc.

What listeners say about The Human Comedy

I was unfamiliar with this book, gave it a try because Ms. Ryan narrated. What a moving, surprising story and I really enjoyed Ms. Ryan's sublime performance. I'm so glad I bought this audio book!!!

This was such a wonderful book. Having seen the movie years ago I didn't know what to expect. The movie kept to the book very closely and even though I saw the movie first it didn't ruin the audio presentation. It is a gentle story of a family living in a small town in California during WW2. The writing captured the flavor of the era amazingly well.
It was a little hard to get used to Meg Ryan as narrator but after a while I got used to her style. I am so glad I decided to select this book .Its a Classic.

Meg Ryan did a phenomenal job of narrating, pausing in just the fight spots and her inflection and nuances added to this wonderful story. I thoroughly enjoyed it.

Not much of a story, but there is a certain sweetness to the characters that move through the slight narrative. Simple prose and a lovely message of goodwill and acceptance. Meg Ryan read this beautifully.

Laugh, cry, and cheer for the human spirit. A triumph. Wish I found this story sooner in my life!

How how HOW did I miss this book my whole life??? An absolutely beautiful small town story. I loved every minute. Proof that a story doesn’t need sex, violence, foul language, witchcraft, it just needs a great writer. Meg Ryan does a really lovely job reading. My absolute favorite audible book to date.

Meg Ryan does a great job reading this book. I very much enjoyed listening to this story. It reminded me a lot of A Tree Grows in Brooklyn. completely different theme, but the book just reminded me of that book. I have no idea why the title is The Human Comedy. but nevertheless I enjoyed the story.

the book and audio did not match

Wonderful story. a true classic. one of the best ever written .the narration is lovely meg did a perfect job bringing it to life for us.

A good book to listen

Good story and well written. Meg Ryan could have done a better job with the narration.