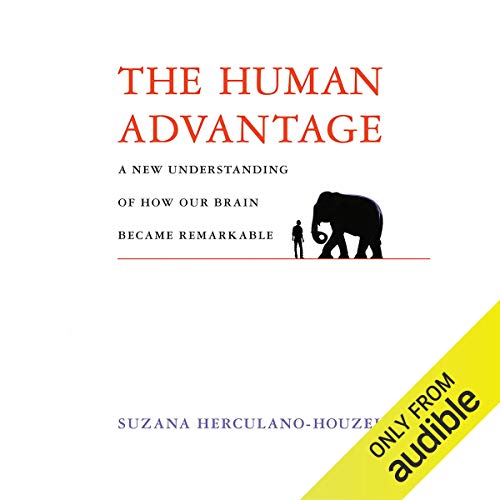 By: Suzana Herculano-Houzel
Narrated by: Dina Pearlman
Try for $0.00

Humans are awesome. Our brains are gigantic, seven times larger than they should be for the size of our bodies. The human brain uses 25 percent of all the energy the body requires each day. And it became enormous in a very short amount of time in evolution, allowing us to leave our cousins, the great apes, behind.

So the human brain is special, right? Wrong, according to Suzana Herculano-Houzel. Humans have developed cognitive abilities that outstrip those of all other animals but not because we are evolutionary outliers. The human brain was not singled out to become amazing in its own exclusive way, and it never stopped being a primate brain. If we are not an exception to the rules of evolution, then what is the source of the human advantage?

Herculano-Houzel shows that it is not the size of our brain that matters but the fact that we have more neurons in the cerebral cortex than any other animal, thanks to our ancestors' invention, some 1.5 million years ago, of a more efficient way to obtain calories: cooking. Because we are primates, ingesting more calories in less time made possible the rapid acquisition of a huge number of neurons in the still fairly small cerebral cortex - the part of the brain responsible for finding patterns, reasoning, developing technology, and passing it on through culture. Herculano-Houzel shows us how she came to these conclusions - making "brain soup" to determine the number of neurons in the brain, for example, and bringing animal brains in a suitcase through customs. The Human Advantage is an engaging and original look at how we became remarkable without ever being special.

What listeners say about The Human Advantage

Anyone who has watched Suzana Herculano-Houzel's TED talk knows she is a charming communicator with a sharp mind. In this book she gives an accounting of how she answered the question, "What is so special about us?" The conclusion— our big calorie-greedy brains couldn't be possible without the invention of cooking— wasn't a given.

This is one of those popular science books that made feel that I was along for the ride solving one of humanity's great questions. There is plenty of scientific history and breakdowns given to help the listener understand the different studies that went into her conclusions.

Dina Pearlman is the perfect narrator, clear, and landing the jokes like she wrote them.

I found this book fascinating in all sorts of ways but it needs an executive summary. Read the following and ask yourself what the author was thinking.

It can go on like this for PAGES. Just put up with this because you can train youself to go intermitently catotonic and make sense out of it all. And very well worth it. Eventually I began to look forward to these epileptic fits as comic relief. In all seriousness I could not help but think this stuff verges on Nobel Prize territory.

I learned a lot of interesting things listening to this book. For instance, our brains are simply scaled up versions of the typical primate brain. However, the other great apes (a small subset set of all primates) are aberrants. They have big bodies but relatively small brains which led to some unfortunate conclussions. Speciffically, that our brains are aberrantly to big. Actually their brains are aberrantly small. The book is full of these sorts of observations.

we are all primates and our brains are not special, yet it is the technological changes that have made us remarkable. wow. love Herculano.