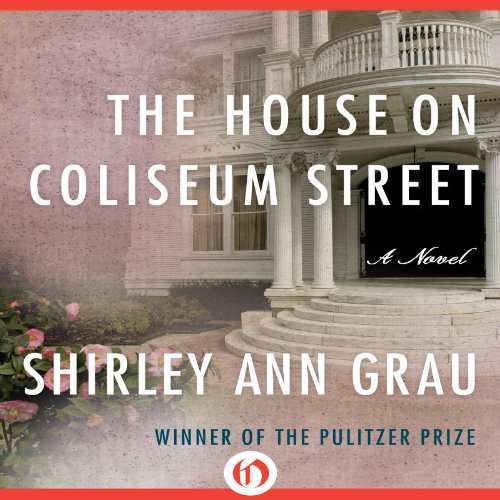 The House on Coliseum Street

The House on Coliseum Street

By: Shirley Ann Grau
Narrated by: Tamara Marston
Free with a 30-day trial

Joan Mitchell has two suitors, and can’t decide whom to marry. With her mother Aurelie’s example in mind, she’d like to skip marriage altogether. Joan and Aurelie live together in a beautiful French Quarter home on Coliseum Street in New Orleans, along with Joan’s many half-sisters born of Aurelie’s five disastrous marriages. Joan lives a mostly carefree life, but when she becomes pregnant, she chooses to end her pregnancy rather than marry a man she doesn’t love - a decision with grave consequences in conservative 1950s New Orleans. The House on Coliseum Street is a brave, heartbreaking love letter to New Orleans, penned by one of the most acclaimed voices of the American South.

What listeners say about The House on Coliseum Street

Another winner by Grau

I turned to this novel because I have read many of Shirley Ann Grau's novels and have enjoyed them tremendously. If you are interested in the South she is a must read. She was born in 1929, won a Pulitzer in 1965 for her The Keepers of the House. My favorite though is The Hard Blue Sky, followed closely by The Condor Passes, then this or The Keepers of the House . Heavens, they are all good. I prefer long over short novels and any novel is better than a short story, for me that is. That I enjoyed this short novel, The House on Coliseum Street, so much says something about her writing skills. It is the writing, not the book's topic that attracts. With her words she draws the South so you feel it with all your senses. She creates dialogs that are pitch-perfect. Her characters feel real, even if they are not typical. What they do and what they say are perfect for them.

As stated, it was not the topic that drew me to the book. Joan Mitchell is 20, unmarried and pregnant. You know right in the beginning that she will have an abortion. The story is about why. How did this come about? Who decided? And why did that person decide? The unborn child's father (Michael), what did he want.....and what did he say? Joan, her mother (Aurelie), her younger sister (Doris), Michael and one more, Joan's fiancé (Fred), all of these are carefully drawn so what happens is understood. Human beings don't act in a vacuum. There is also Joan's fourth stepfather - living in the same house on the top floors but completely separated from them. Aurelie has been married five times! Each time one child was born. What Grau has done is create a family, thrown in some boyfriends, and we watch them interact. This is a psychological novel with the characters, the time and the place all superbly drawn.

The author made me curious from the very first pages.

Let's call this a coming of age story, not about a young teenager, but rather the complicated process of standing on your own two feet. Knowing who you are. Having the strength to make your own decisions. This doesn't happen in the teens, it doesn't happen overnight and it isn't easy. How we get to this point will always be influenced by those around us.

The audiobook narration by Tamara Marston was excellent. The characters have such different personalities. This is wonderfully mirrored in their voices. The speed is perfect and the book is simple to follow. Wait till you hear Aurelie, Joan and her sister Doris! Two sisters. You love your sister, right? Well you may also despise her, particularly if one ...... Curious? Well, read or listen to the book. It’s very good.

Would you try another book from Shirley Ann Grau and/or Tamara Marston?

I'm going to try another book by Grau even though my first selection was very disappointing. I mean, Grau won a Pulitzer for her 1964 saga THE KEEPERS OF THE HOUSE. Maybe I just started with the wrong book. It was incredibly boring. I don't want to fault Tamara Marston for Grau's mistakes. Marston has a nice, soothing voice which normally makes nighttime listening very pleasant. (Like a child needing a bedtime story, I often listen to audio books as I'm drifting off to sleep.) Marston did a decent job of separating the assembled cast of characters. Again, I hate to blame a narrator for an author's lack of interesting content. Over all, this was a terribly unadventurous southern tale. If 2017 was the year of empowered women, this 1961 publication drags women back to 1940. So many details were skipped over. It felt unfinished, very anticlimactic and bitter.

What could Shirley Ann Grau have done to make this a more enjoyable book for you?

Well, for starters, I don't expect authors to write a story to appease me. Do your thing, Shirley. Obviously you know what you're doing. But...there was way too much of this (and I'm making up an example for effect):

Why did Grau choose to make the character's claim every darn sentence? Drove me nuts! There could've been a lot less of that. Said Mary.

Would you listen to another book narrated by Tamara Marston?

I would listen to another performance by Marston. I believe in second chances. Marston did a fine job with Joan, the main character. Marston was convincing as Ora Lee, Joan's detached mother, who thought herself to be a fine southern lady. I thought she was a southern bitch. The women in THE HOUSE ON COLISEUM STREET are shallow and selfish. Ora Lee collects husbands like I collect books. Of course, Mom prefers the hubster to have a large bank account. Love is an afterthought.

What character would you cut from The House on Coliseum Street?

Very little actually occurred in this entire story but I believe every character played a significant role. Without the other, it's simply impossible to imagine this would have gone much further. If I positively had to cut a character I'd choose Ora Lee's husband Dr. Herbert. He's the only person that could be eliminated without detracting from events. I feel like he's just written into the storyline to show that Ora Lee is incapable to care for others.

Skip this book. It will not enrich your life. I was utterly moody and depressed whilst listening to this sad family throw it all away. My experience with this audio book felt like a chore. I can't believe I managed to complete the listen. In fact, I'm rewarding myself 5⭐for patience. I deserve it.