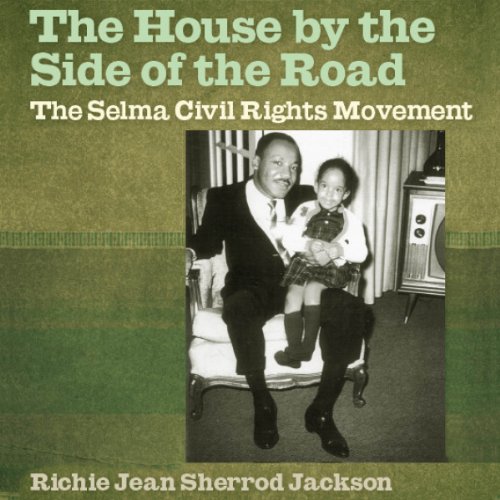 The House by the Side of the Road

During the 1965 Selma voting rights campaign, Dr. Martin Luther King, Jr., set up informal headquarters at the home of Dr. Sullivan Jackson; his wife, Richie Jean; and their young daughter, Jawana. Dr. Jackson was an African American dentist in Selma, whose profession gave him some protection from economic reprisals, and he was one of the movement's prominent local supporters. Richie Jean was a childhood friend of King's wife, Coretta Scott King, who had grown up in the nearby town of Marion, and the King, Abernathy, and Jackson families were all very close.

In the dramatic and tension-filled months of 1965 that led up to the Voting Rights March from Selma to Montgomery, King and other national leaders, including Ralph David Abernathy and John Lewis, held strategy sessions at the Jackson house and met with Assistant Attorney General John Doar to negotiate plans for the march. One of the most dramatic moments of that time occurred on Monday, March 15, when President Lyndon Johnson addressed a joint session of Congress. Huddled with his aides in Jackson's living room, King was watching the speech on television when the president issued his call for a national dedication to equal rights for all. When Johnson ended his speech with the words “We shall overcome,” King's lieutenant C. T. Vivian looked across the Jackson living room and saw the mark of a tear on Dr. King's cheek. Nobody in the room had ever before seen King weep. They had seen him worried or fretful, sometimes depressed, and more often they had watched him lead with humor and courage, his emotions always carefully in check. But on this night, as they sensed that the voting-rights victory was near, and as the president of the United States seemed to be adopting their cause as his own, King finally let his feelings flow.

This book is a firsthand account of the behind-the-scenes activity of King and his lieutenants - a mixture of stress, tension, dedication, and the personal interaction at the movement's heart - told by Richie Jean Jackson, who carefully created a safe haven for the civil rights leaders and dealt with the innumerable demands of living in the eye of events that would forever change America.

“This book tells the story of a place, a time, and a people whose struggle and sacrifice helped this nation create a more perfect union. The house by the side of the road became a haven from the hostility raging all around us-from threats, jailings, beatings, and even death itself. It was a necessary stop for so many activists, and it is a necessary read for anyone interested in the Selma Movement.” (John Lewis, congressman from Georgia)
“Thank God for this loving, faithful family. Their significance to the effectiveness of the movement is a tale that's never been told. They put their own safety at risk to serve the common good.” (Reverend Joseph Lowery, former Southern Christian Leadership Conference (SCLC) President)
“The House by the Side of the Road is a fine glimpse into history, not just the civil rights era, but the personalities of this era... Because of this book, we know that the Rev. King's cold was treated with red onion, honey, lemon, and ‘several teaspoons' of whiskey. I love these details.” (Rick Bragg, author of All Over but the Shoutin' and Somebody Told Me)

An Amazing Glimpse Into A House That Still Stands

If you could sum up The House by the Side of the Road in three words, what would they be?

To sum up The House by the Side of the Road in just three words is very difficult. My three words would be sincere, important, and beautiful.

What was one of the most memorable moments of The House by the Side of the Road?

There were so many memorable moments in this book. I like when she says "neighbor means ALL of God's children." I also like where she says that the dictionary defines friend as: one attached to another by affection or esteem. This is such a wonderful book written by Richie Jean Sherrod Jackson. I love the way she welcomed all the people into her home as friends and neighbors. A must read.

Stephanie King did an outstanding performance narrating this book.

The most moving moment in this book was the night of April 4,1968 when the Sullivans received the phone call that Martin had been shot in Memphis.

I received this audiobook free of charge in exchange for an unbiased review.