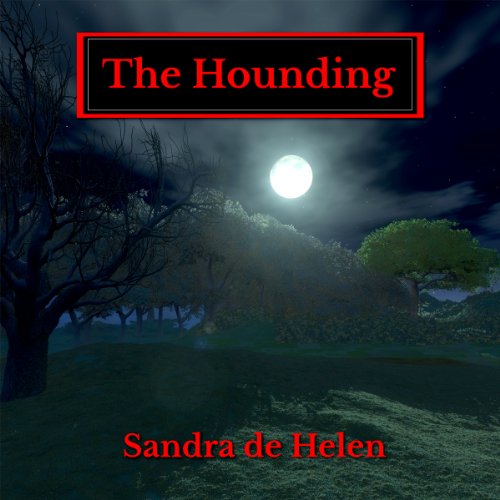 Tall, thin, androgynous Shirley Combs considers herself the world's greatest living detective because she uses the methods and casebook of Sherlock Holmes to solve crimes of the gentry of the American city most closely resembling London, England - in terms of the weather, at least. Sidekick/narrator Dr. Mary Watson both delights in and is frustrated by her partner's behavioral resemblance to Sherlock. Combs is unemotional, analytical, and given to pacing through the night in the streets of the almost perfectly livable city of Portland, Oregon. Her ability to observe details and understand their relationship to a case is unmatched; her demands on Watson's time are too.

What listeners say about The Hounding

Needing to take a business trip this week, I was looking for a story between 3-4 hours to help pass the time while traveling. This was 4 hours well spent. Jesus Reed's narration was very good. She had good pace, inflections, and tone. I also liked the differing voices between the genders.

The Hounding is a story that is written in the vein of the Sherlock Holmes stories by Sir Arthur Conan Doyle, with the same mysterious characters, several of whom have motivation to commit the crime being investigated. What's more, the story is written in the first person and from the perspective of Shirley Holmes' sidekick and soon to be partner, Dr. Watson. The characters in the Hounding are aware of their similarities with Sir Arthur's more famous fictional characters, which I appreciated.

Simply put, this story helped make the time at the airport not seem as long and tedious. Thank you!

A very fun and enjoyable read that you won't be able to put down till it's over. As a fan of Nancy Drew and Sherlock Holmes, I loved this mystery. Overall super fun and funny, would recommend.

Fun Mystery - Over Too Soon.

If you could sum up The Hounding in three words, what would they be?

What was one of the most memorable moments of The Hounding?

The elevator scene was certainly memorable.

Which character – as performed by Jess Reed – was your favorite?

I did listen to is in one day (sitting, cleaning, grocery shopping).

At first I thought the narrator was going to be a bit irritating. The narrative was, for lack of a better word, staccato. As I continued to listen, however, the style of narration made sense. I would listen to Jess Reed again.

I look forward to listening to future books in the series (and read by the same narrator).

This was an interesting retelling of The Hound of the Baskervilles with reimagined, uber characters. I think the facts and clues surrounding the case could have used a little work, and with a couple re-reads and re-writes it would have been a great little story (I say this because the original and all subsequently reimagined characters implied to be Sherlock Holmes (that I'm familiar with) are known for their deductive reasoning skills; some of the jumps made in this book would have been much better and not look so much like guesswork and out of the blue had there been a couple things included along the way). I thought the characters were a little flat (I had the feeling that when they were written, many assumptions were made that the audience would just get who they are and less detail was employed than necessary to really make the characters come alive) but they were fun and I did enjoy their lively banter. Solid 3-star story (which really isn't bad!)!

Note on the audio (which has nothing to do with the story, itself): the sound wasn't great. It was really tinny and it made it hard for me to hear many parts.

Wish I could get my money back. Do not waste your time. Characters were never developed and the narration was terrible. Pass on this one.

This was an interesting premise, and should have been a nice quirky little story. It wasn't dragged out by unnecessary plot, but it didn't really work.

And that was purely down to the narration and recording. First I'll deal with the engineering. I don't know if the recording was bad work from the studio used or if it was the downloaded streaming. There seem to have been a whole host of lesbian audio books recently suffering from the same problem.

However, that doesn't account for the bad narration; it felt very rushed and so fast at times that it was hard to keep a trace of who was suppose to be talking. The voice was okay, but with the rushed nature of the words the narrator wasn't able to really show if she could have done a better job. Better breaks of the sentences, (instead of running together like they did), would have made the entire story better.

That lets the whole thing down, which is a shame because I could see what the author wanted to do with the work, but when the narration detracts that badly then listening to the story isn't really pleasant.

There was a preview of the next book at the end, although it isn't showing on the UK Audible catalog yet, and given that this book was interesting enough I would probably buy the next in the series.

However, I do feel Audible needs to look more closely at the quality of the works we're paying good money for, so Audible, please take note; these poor recording are happening a bit too often for my liking. Plus I notice I'm not the only reviewer to have mentioned this issue.