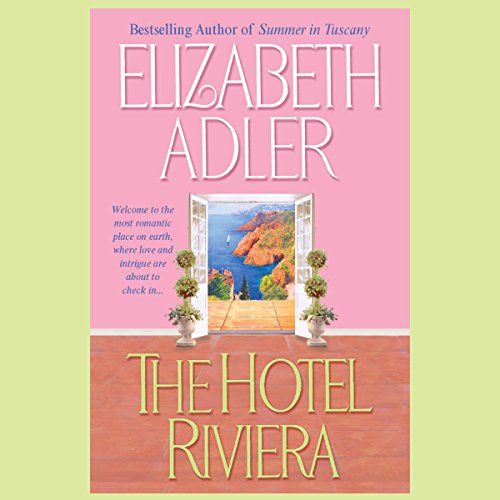 By: Elizabeth Adler
Narrated by: Carrington MacDuffie
Try for $0.00

American Lola Laforet seems to have it all - a whirlwind romance that turned into to have and to hold, a charmed life on the Cote d'Azur, and ownership of the magnificent Hotel Riviera. Tragically, the dream ends as abruptly as it begins when her beloved husband mysteriously disappears.

Heartsick, confused, and lonely, her life is thrown into further turmoil when a handsome stranger, Jack Ferrar, an American expatriate living on his boat, drops anchor in Lola's harbor and teaches her the meaning of instant attraction. When various sinister people - all claiming ownership of the Hotel Riviera - and the police suddenly appear, Lola is forced to confront the past she left behind and track down her vanished husband, with only Jack - and her conflicted emotions - for company.

What listeners say about The Hotel Riviera

One of Elizabeth Adler's Very Best!

This is a wonderful escape with romance, mystery and a wonderful setting. It is the next best thing to a trip to France.

Such a sweet love story but more than that too.

Would you consider the audio edition of The Hotel Riviera to be better than the print version?

I loved the audio edition because I really like the narrator. I look for books she narrates because she has such a soothing voice. I really loved the story though. I could just picture the Hotel Riviera and wish I could find such a charming place to visit! I'm surprised it only has 3 stars because it's one of my favorities and I loved it as much the second time reading it as the first. Great characters! The description of Scrambled, Bad Dog and Chocolate are charming!

Have you listened to any of Carrington MacDuffie’s other performances before? How does this one compare?

I've listened to many of her books and this is one of my favorites but she's always great.

Yes, it was hard to stop but it's long.

This book was a light and easy listen but the dialogue between the characters got a little silly at times.