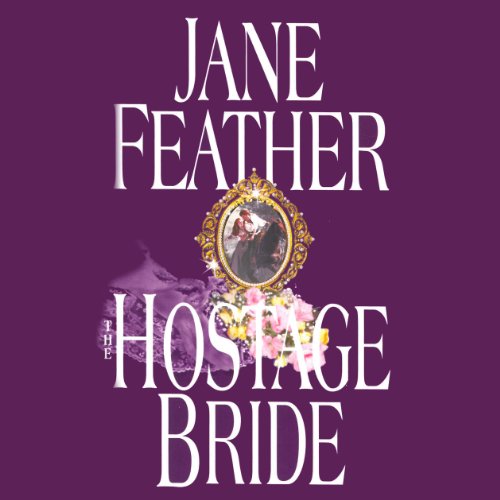 By: Jane Feather
Narrated by: Jenny Sterlin
Try for $0.00

Here is the first of my new Brides Trilogy, in which three unconventional young women vow they will never marry - only to be overtaken by destiny. Bride #1 is the outspoken Portia...It's bad enough that seventeen-year-old Portia Worth is taken in by her uncle, the marquis of Granville, after her father dies. As the bastard niece, Portia knows she can expect little beyond a roof over her head and a place at the table. But it truly adds insult to injury when the Granvilles' archenemy, the outlaw Rufus Decatur, hatches a scheme to abduct the marquis's daughter - only to kidnap Portia by accident.

Portia, who possesses more than a streak of independence as well as a talent for resistance, does not take kindly to being abducted - mistakenly or otherwise.

Decatur will soon find himself facing the challenge of his life, both on the battlefield and in the bedroom, as he contends with this misfit of a girl who has the audacity to believe herself the equal of any man.

What listeners say about The Hostage Bride

WOW! Feather really knows how to weave a story!!!!

When I feel like listening to an intricate story with rich, well developed characters, I know that Feather will not disappoint. Yes, Feather is an accomplished author, but more than that, she is an excellent story teller. After listening to this first book in her Bride trilogy, narrated by Jenny Sterlin, I am fully invested in the series. The narration was authentic and very well done. Sterlin's performance brought these fantastic characters to life. Now about those characters....

Feather weaves together a full-bodied, complex array of characters whose interactions are as imperfectly natural and real as humanly possible. Portia Worth, is an unlikely novel heroine, but what an incredible, fun and lively woman she is! By her own description, she's a "scare crow" as she's thin, tall and owns a halo of ginger locks that are as unruly as her spirit. And, this untamed, strong spirit is what captivates our rogue-ish hero, Rufus Decatur. But, let me preface his intro by clarifying that he is very attracted to Portia (it's not just her spirit...lol). She does kindle a flaming fire within him, and when he gives her his heart, it's with everything that defines Rufus. (My favorite kind of love, by the way...haha). I enjoyed their initial meeting, their banter, fun verbal sparring and the development of their unlikely love affair.

The story never falls flat, but moves forward, as it takes place during a tumultuous time in England, during the civil war era where an unrest and instability seemed to seep into the lives of the effected. Rufus runs with a merry band of outlaws, yet Rufus's whole existence is engulfed by his need for revenge and retribution from his nemesis, Cato, the Marquis of Granville. This grudge was initiated by their fathers as Cato's father was responsible for the dishonor and loss of the Rothbury title and lands. Thankfully, there is healing and a restoration for Rufus, with Portia by his side. (A little backstory--Portia is Cato's niece, the bastard daughter of his half brother, Jack....but you have to read the story yourself to get the full picture :-)

The theme of friendship was fantastic in this book. The bond was somewhat reminiscent of Kleypas's Wallflowers. I loved the wonderful bond between Portia, Phoebe and Olivia. I can't wait to listen to their stories next! By the way, I found Cato's character to be the most tragic. Cato was such a serious manager of his estates, property and family, as well as holding an important role on the national scene, yet he was so blind to the inter-workings of his family. He lived with a beautiful, trophy wife (who was a cold witch inside btw), but didn't really see her, or love her. They shared a very cold existence together and I'm interested to see how the serious, yet socially unaware Cato (Olivia's father btw) transforms as he's the hero in the next book.

I love stories that have a great plot, interesting characters you grow to care for, and a steamy, passionate romance. This book delivered on all fronts. NOW ON THE TO THE NEXT IN THE SERIES!!!--The Accidental Bride.....

I enjoyed the storyline of the 3 girls and how each book incorporates the long-standing friendships.

The Hostage Bride was a little hard to get started because of the details with the war, but the storyline allows you to really get to know the characters.

Jane Feather does an amazing job at making the characters come to life and fall in love against all odds.

Lots of positive reviews, so I'll focus on what was missing for me. Overall, I like Jane Feather's writing and storytelling. Her main characters nearly always follow the "independent-heroine-falls-in-love-with-hot-bad-boy" under unique circumstances. And I LOVE that when the writing is good! However the circumstances in this story (hero's father is betrayed by a local peer and tasks his son to seek revenge and regain family title/fortune) is understandable, but not terribly compelling. Feather also adds on tedious details that do not enhance the main story. For example, I wish she had pursued the 3 childhood friends storyline more and developed the love story through their connection. But my REAL beef is how the heroine chooses to act almost reckless at times, then follows her behavior by choosing NOT to share critical information with the hero. Logically, he does not trust her and she is hurt. At this point, I expected Feather to share the blame between both characters when they break up, but Feather makes the hero the scapegoat. Nooo! I've since learned this story was originally published in1998. Fortunately, society's views on trust and communication in relationships has have evolved, but still this ending was disappointing.

l really did find this a extremely enjoyable listen! I found myself telling Portia " NO.... " or any other of a wide variety of warnings, expletives, or wonderments!

The characters were dynamic, always someone to love, hate, fear or give you warm fuzzies! Exceptionally well read AND written. No fluffy bimbos here. Emotions and anticipation woven well... verrrry well done!

Credit worthy? I can remember if it was cheap enough that I just paid for it.... but I would use a credit. I plan to go on to the next book but almost regret that my favorite couple characters won't be prevalent ... thru their story, their challenges met.... (no spoilers from me, soooooo) 'and their journey' I became quite attached to them.

Its a full five stars all around from me!