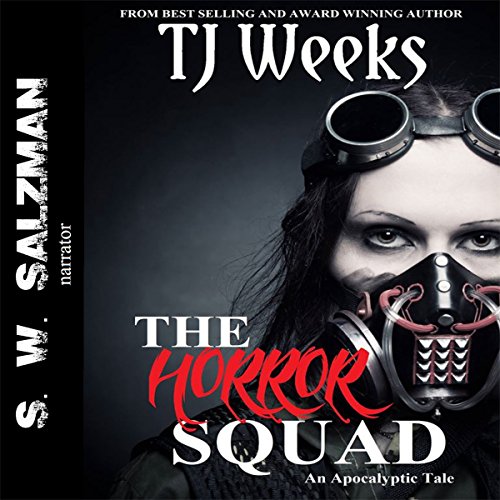 With the world now plagued by rotters, it's up to my team and I to take care of the living and take out the dead.

What listeners say about The Horror Squad

The Horror Squad is a short serialized book about a group of people trying to survive the zombie apocalypse. It's read in the first person and seems to be an auto-biography because the main character has the same name as the author. Hmmm,,,,,

Because of the genre, there has to be an obligatory comparison to The Walking Dead. There are a lot of similarities to TWD, and I can almost envision this group being in the same timespace as Rick's group and meeting up at some point. What was missing was any sort of conflict in the story. Sure there were zombies, but they were always dispatched with ease by the group. Besides an attempt at sexual assault, nothing bad happened to any of the characters. They seemed too.... safe, if that makes any sense. Granted this changes towards the end of the book. And even this was a sudden, jarring, screech to the finish, accumulating in a cliff-hanger ending. Is there a sequel? I see nothing on the Audible page that this book is part of a series, but the cliffhanger ending would imply a series.

In contrast with other reviews, I believe Mr. Salzman did a great job narrating and his voice suited many of the characters One one hand he has this natural Michigan accent, but can do southern "good 'ole boy" accents perfectly. Kudos to your talent sir! One minor nitpick is the narrator's choice of narrating the "...he said..." and "...she replied..." sections of text after a character speaks. The delivery seems very mechanical and monotone, almost pre-recorded, and there were times it was distracting. If Mr. Salzman could make these transitions out of the character speaking more organic in future performances, he would be a 5-star narrator.

This audio book was gifted to me by the narrator at no cost in exchange for an unbiased review via Audiobook Boom.

This is how I would imagine a county strong family to be. Hunting fishing and coffee. strong family values and no b's before coffee cigarettes and on occasion Jack. great story awesome narration.

This is your typical zombie apocalypse book. I really enjoy that genre, so this one was no different. The book has action, zombies, and people. The book is well-written and the narrator did a very good job bringing the characters to life.

I wasn't sure if I was going to like this book or not. I can say I enjoyed it. The story was great and the narration was awesome!

I have really enjoyed this book. There are a few sections that make you go hummm but it keeps you guessing. The narrarator does a fantastic job with the characters. He has a real soothing voice with character that i find dragged me in. The characters became real and i became vested in them. A great book to add too tie library. Well worth the time and money

The book was too short but it was at least entertaining. Not a real big fan of the narrator but I would listen to the rest at a later date. Maybe a Box set next time

I love post-apocalyptic fiction; however, this is only the second zombie book I've read (listened to on Audible). I'm so glad I did too. The zombies, while a part of the story, don't completely dominate the story.

We get to know the characters, their personalities and connections. The narrator, S.W. Salzman, really makes them come alive and helps us distinguish the characters through his awesome performance. His narration keeps my attention, and I enjoy listening to his voice.

This group of survivors, "The Horror Squad", have banded together to increase their safety in their new world. However, nothing lasts forever, and supplies need to be rounded up, while the zombies are out there looking for their next meal. Great book and wonderful narration! I'm heading to Audible to get book 2 now.

It was not that long . It was just of 3 hours . Story was good so i just completed in one time only .The characters are interesting and of course zombies . Its was my first book of TJ Weeks and i am really impressed . Looking forward to his other audiobooks .Narrator was also very good . If you like this genre than this is a book just for you . I am now waiting for next part .

Overall, I enjoyed this book. It was a little short. I hope the rest of the series become available on Audible. I received this audiobook for free through Audiobook Boom for my unbiased review.

I got into this book but I felt like nothing pulled me in. I enjoyed the story line but it left me feeling like I wanted more. The narrator was easy to listen to and perfect for this book. “This audiobook was provided by the author, narrator, or publisher at no cost in exchange for an unbiased review courtesy of Audiobookboom”

What the hooijamflip are "husky eyes"?

This lost me at the first girly-girl sentence.

I struggled on to chapter 2, where the author's fear of using the word "said" became so at odds with the nadgers required for surviving the apocalypse that I could no longer suspend disbelief to continue. NOT EVERYTHING IS A STATEMENT, HON!

Miffed as I'd bought the series...

The narrator did a good job, sorry about the material.

I loved it.
Great story and great narration.
A must buy for any fan of T.J. or S.W.