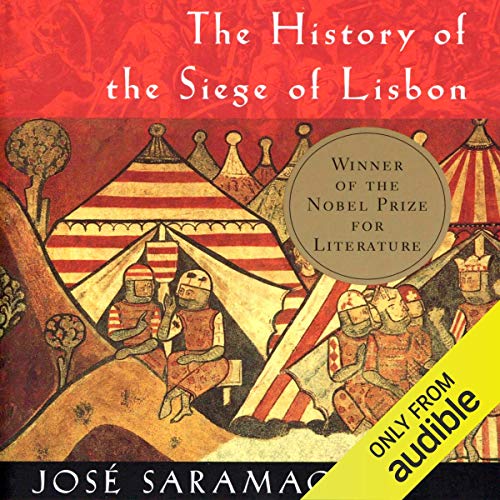 The History of the Siege of Lisbon

"If proofreaders were given their freedom and did not have their hands and feet tied by a mass of prohibitions more binding than the penal code, they would soon transform the face of the world, establish the kingdom of universal happiness, giving drink to the thirsty, food to the famished, peace to those who live in turmoil, joy to the sorrowful... for they would be able to do all these things simply by changing the words...." The power of the word is evident in Portuguese author José Saramago's novel, The History of the Siege of Lisbon. His protagonist, a proofreader named Raimundo Silva, adds a key word to a history of Portugal and thus rewrites not only the past, but also his own life.

Brilliantly translated from the Portuguese by Giovanni Pontiero, The History of the Siege of Lisbon is a meditation on the differences between historiography, historical fiction, and "stories inserted into history". The novel is really two stories in one: the reimagined history of the 1147 siege of Lisbon that Raimundo feels compelled to write and the story of Raimundo's life, including his unexpected love affair with the editor, Maria Sara. In Saramago's masterful hands, the strands of this complex tale weave together to create a satisfying whole.

"Saramago raises provocative questions about the nature of history and language. Serious readers willing to devote the time the book deserves will be dazzled by Saramago's inventiveness, intelligence, and wit. Offered in a superb translation, it is not to be missed." ( Booklist)
"The best work we've seen yet from a consummate artificer who may well be one of the greatest living novelists." ( Kirkus Reviews)
"Narrator Robert Blumenfeld does a fine job of rendering the spirit and manner of the great Portuguese fabulist..." ( Audiofile)

What listeners say about The History of the Siege of Lisbon

Not for those who love a plot-driven novel

I want to love Saramago as much as I love Portugal. But his novels are so thin on plot that I struggle. This is my second attempt (Balthazar and Blimunda was my first) and I just can't do it. The rambling, the lack of chapters, the run-on sentences...I know this is about me and my preferences, but there you have it. If you love a novel with plot, consider finding a different Nobel Prize winner or a different Portuguese author.