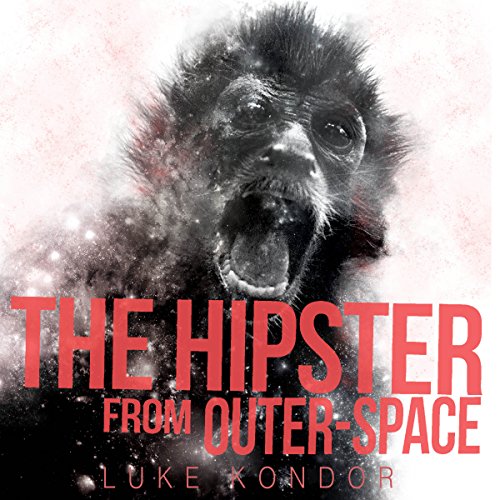 The Hipster from Outer Space

An ancient space being called Moomamu has awoken on Earth and wants nothing more than to get back to his home in the stars. Taking the advice of his cat, Gary, he makes his way up t'north to meet the Tall-One-With-Insight.

As he journeys across a land of underground trains, cappuccinos, and a man obsessed with killing him, he soon learns that being on Earth is a symptom of a bigger problem, and going home just might destroy the planet.

Be warned: contains graphic violence, swearing, and the protagonist is a bit of a git.

What listeners say about The Hipster from Outer Space

Honestly wasn't sure what to expect from this book. The premise is ... well, quite out there to be honest, but I'm happy to report that it was a blast. Quite trippy! Thanks to whispersync I jumped back and forth between reading and listening to the book, great narrator so I'll be honest and admit I listened much more than I read! While the story may not be for everyone -- and I'll be completely honest again and admit I have no clue exactly what genre to classify this book as -- it's one heck of amusing wild ride and definitely one of the most unique books I've experienced in a while. If you are looking for something totally different, this may be it.

Wacky Fun But Not For The Faint Of Heart!

To be completely honest, I am on Luke Kondor's e-mail list and received a free copy of this audio book just by being in the right place at the right time. I was not asked to do a review. However, I love to provide feedback to authors and give them honest reviews so that is why I wrote this. Having read the warning on the summary -- I wasn't sure what to expect but I enjoyed this book immensely and would have gladly paid full price for the experience.

First, I want to talk about the humor. Luke Kondor lives in the UK and humor in The Hipster from Outer Space has a very British flavor. Some have compared his works to Douglas Adams and I agree there are similarities in style but they are not the same. Part of that is because they come from the same part of the world. Being an American that enjoys British humor -- I loved it! The humor is fantastic fun and Luke's descriptions of Moomamu The Thinker and the way he processes the world is such a treat! On more than one occasion I found myself laughing out loud or pausing the book to tell my husband about one of the lines. Moomamu and his initial thoughts about dogs are amazing! Also, there's Gary and he is a blast!

Secondly, the themes in this book can be somewhat mature. I understand why the Luke put the warning of "BE WARNED: CONTAINS GRAPHIC VIOLENCE, SWEARING, AND THE PROTAGONIST IS A BIT OF GIT." following the summary on his amazon page for this book. However, I disagree with the reviews that say the violence is gratuitous. I felt like all of the violence was in the story for a reason. There was more depth to the story and to the violence itself than one would expect from such a humorous book. I won't spoil anything but this story has depth and satire! I enjoyed this book for so many reasons and look forward to rest of the trilogy!

Finally, for the narration. Ian McEuen was a perfect fit for the narration of this book. He does a very good job of giving the characters their own individual presence. This includes different types of accents and subtle changes in the way he emphasizes certain things. I really enjoyed his narration and it really helped me get sucked into the world. His narration added so much to the book -- I am hoping that the rest of the books in this trilogy get made into audio books because I will buy all of them.

Silly without being funny

This novel is not my cup of tea! If one is looking for silly and very funny sci-fi try The Adventures of Tom Stranger, Interdimensional Insurance Agent by Larry Correia and SuperEgo by Frank J Fleming. I did not finish this book, but I did listen to the first 6 hours.

this is totally wacky and absurd but so much fun

I wasn't sure what to expect from The Hipster from Outer Space and wasn't entirely convinced it would be the right audiobook for me. I can honestly say I've never listened to anything quite like this in my life. It is an immensely imaginative, surrealistic and satirical science fiction story, and I loved it!

Moomamu is ancient alien who has experienced a lot. Different cultures, different planets. But when he wakes up in London and finds himself occupying the body of a human, a hipster, he just wants to get back home because life on earth is rather perplexing. Fortunately, he meets Gary. Gary is a cat. A cat that speaks. Returning home isn't straightforward, though. There is a psychopath with an obsession for self-help tapes and then the matter of having to save the earth and humankind.

Obviously, this is totally wacky and absurd but it was an awful lot of fun and great entertainment for 9 hours. Luke Kondor has a nice style of writing that is easy to engage with and with his very creative mind and brilliant sense of humor his story held my attention for the entire time.

The story is told from different perspectives, which required a bit of concentration initially to keep up with all the different characters and to work out how it all fitted together.

The highlight for me was the way the author imagined how a creature from outer space would view our modern society and experience our daily lives, from commuting to coffee shops to living with pets etc. Lots of irony and fun. There is a bit of swearing, but it was right for the characters. The violence wasn't over the top or gratuitous.

This is book 1 of a trilogy and while there is no huge cliffhanger, the ending leaves the plot and some of the characters' fates wide open. The other two books haven't been released yet. I would certainly be interested in listening to future sequels. Especially, if narrated by Ian McEuen, whom I hadn't listened to before. His absolutely fantastic narration really enhanced my enjoyment of this story. He excelled at the many unique and distinctive voices that were all completely suitable for the particular characters. Apart from Moomamu and Gary, the cat (superb voicing), my other favorite was the self-help guy. Brilliant performance with the right nuances of malice, laughter, whispering and different accents. Pacing and delivery were spot-on. The quality of the production was excellent.

If you want to try something totally different, something quirky and witty, with awesome, well-developed characters, then I can recommend this.