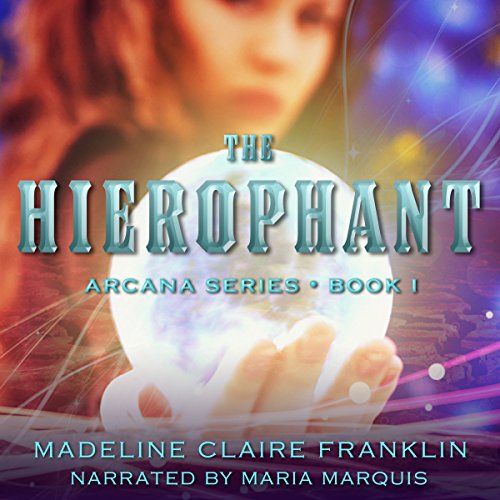 Demons are watching you. They move invisible through our world, hunting for rare prey - most humans don't see the monsters that lurk in the dark, and as long as you can't see them, they can't hurt you.

But Ana sees the demons. Creatures once found only in bedtime stories told by her late mother have crept from the shadows, whispering her name, stirring ancient magic in her blood.

On the day her tarot deck foretells a disturbing change, Ana encounters an uncanny young man who literally stops her heart. Trebor has strange powers, and an even stranger quest, and for some reason wants to help her. But the closer Trebor gets to unlocking Ana's power, the more important - and dangerous - his own quest becomes. And in a world haunted by demons determined to find the key to their empire, there is much more at stake than one girl's soul.

Young girls eyes are opened to a whole other world

What was one of the most memorable moments of The Hierophant?

The first chapter is a catcher. I'm curious as to where the world will go with demons, angels, and dead. Curious about Ana and the man who magically winds himself around her heart that day at the cemetery.

Have you listened to any of Maria Marquis’s other performances before? How does this one compare?

Maria does a magnificent job of the quick moments then slowing with the feelings. She speeds the sentences and they are still clear and crisp, but move the scene in a cadence that makes us feel the rush and eases of moments, fear then calm. There is a background sound, a light static? of sorts. I don't notice it as much when Maria is speaking, but I do notice it when she's done speaking and there are a few seconds at the end of a chapter, it's absolutely quiet. Easily missed in listening as the story is the focus. Maria voices the characters, bring there dispositions to voice. Her vocals of Trebor and Ana create them as individuals in a three dimensional way.

There was a moment, much later in the book, that caught my heart. I figured I knew what was going to happen, and it did, but it was a powerful moment with the characters. An internal realization and acceptance. Maria's narration helped make my heart thump at that moment.

*This audiobook was provided by the author, narrator, or publisher at no cost in exchange for an unbiased review courtesy of AudiobookBoom dot com, at my request.

I was drawn into this story from the beginning. I was curious with just enough hints and details of the world of demons and angels. It's subtle yet impacting with what Ana comes across, what she sees in the shadows. Then her tarot readings are chilling. They feel to have a greater meaning. We can see the relation of them to the past we learn and the present events we see, so the future telling feels as it'll be a huge impact for her. But what's told to come, will it solidify the idea of what's foretold or will they change what fate has written for them?

Fascinating, crafted writing to draw a world, characters, and events all together and rely on each other to create the story here. I didn't want to stop listening as I was so engrossed with the creations here. Madeline has written the scenes in a way to show us through experience, with the characters, who they are and how they feel.

Wow. The growth of Ana's relationships amaze me. Her time with Trebor is always magical. I love them together and what lingers there with them. There is something more, but Ana doesn't know it and Trebor doesn't tell but there are hints. Such a sweet relationship starting! Ana and Andy, I have my suspicions about him. lol. It's nice to see a new friend that has interest in things Ana does, like her mother and her clan. But there are traces it could be a deeper reason there, we just don't know it yet.

Madeline could have taken the easy way out and ended the story at a few points of the book. I'm sooooo glad she didn't! There is so much that Ana and friends go through. And it's an amazing story to journey through with her.

I've already looked, there is a book 2. I can't wait for it to come out in audio and hope Maria is the narrator again!

ANOTHER YA SERIES I DON'T WANT TO END

I love the characters in this book! I love the twist and turns into the life and past of ANA! I love the love story and heartache of another great YA series. Can't wait to listen to book 2 and find out where this relationship goes next.
"This audiobook was given by the author, narrator, or publisher at no cost in exchange for an unbiased review via Audiobook Boom."