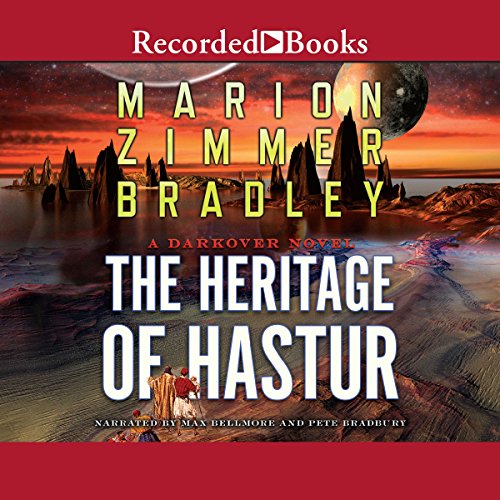 The Heritage of Hastur

By: Marion Zimmer-Bradley
Narrated by: Max Bellmore,Pete Bradbury
Try for $0.00

Described as "Bradley's best novel" by Locus, The Heritage of Hastur, the longest and most intricate of the Darkover series, is a brilliant epic of the pivotal event in the strange love-hate relationship between the Terran worlds and the semi-alien offspring of forgotten peoples.

This is the novel of the Hastur tradition and of the showdown between those who would bargain away their world for the glories of star-borne science and those who would preserve the special "matrix" power that was at once the prize and the burden of ruddy-sunned Darkover.

A note from the author: To the faithful followers of the chronicles of Darkover whose greatest delight seems to be discovering even the most minute inconsistencies from title to title: This audiobook tells a story that a great many of the friends of Darkover have asked me to tell - the story of the early life of Regis Hastur, and of the Sharra rising, and of Lew Alton's first encounter with Marjorie Scott and the man who called himself Kadarin.

The faithful followers mentioned above will discover a very few minute inconsistencies between the account herein and the story as Lew Alton told it later. I make no apologies for these. The only explanation I can make is that in the years that elapsed between the events in this audiobook and the later novel dealing with the final destruction of the Sharra matrix, Lew's memories of these events may have altered his perceptions. Or, as I myself believe, the telepaths of the Arilinn Tower may have mercifully blurred his memories, to save his reason.

What listeners say about The Heritage of Hastur

Starts at one end if a spectrum and ends at another

It starts with shallow and formal human interactions, but ends with all of it being shattered by deep sorrow and suffering held together with the openness of love. Great narration...