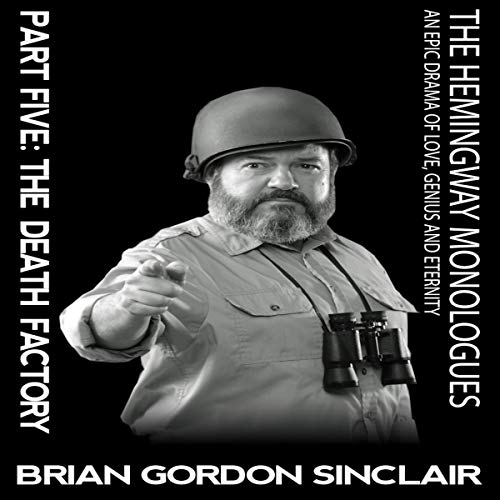 This one-man, two-act play premiered, after several delays, in Key West, Florida, in 2009. It examines another phase in the life of Nobel and Pulitzer Prize-winning author Ernest Hemingway.

From the joys of absinthe to the appeal of Ava Gardner, Ernest Hemingway turns to the exotic temptations of China and his third wife, Martha Gellhorn. Back in Cuba, he chases U-boats and tracks Nazi spies as a prelude to the European war and flying missions with the Royal Air Force.

Whether commanding French freedom fighters or liberating the Ritz Hotel in Paris, Ernest manages to encounter Sylvia Beach, Marlene Dietrich, Pablo Picasso, and Mary Welsh (later to become his fourth wife). While serving in “the death factory” that is World War II, his emotional resources are strained when his firstborn son is taken prisoner by the Nazis.

What listeners say about The Hemingway Monologues, Part Five: The Death Factory

The story is great. The reading is very realistic. You feel as if you are listening to Hemingway!