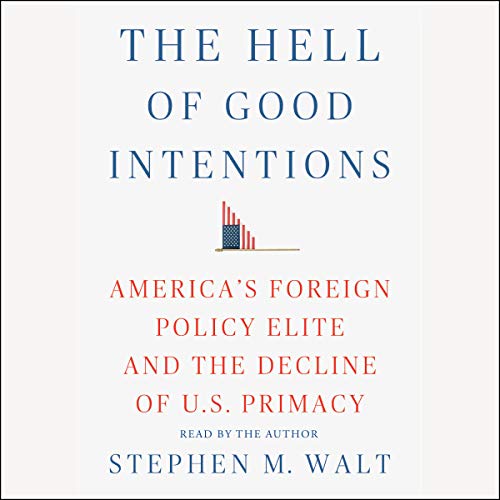 The Hell of Good Intentions

From the New York Times best-selling author Stephen M. Walt, The Hell of Good Intentions dissects the faults and foibles of recent American foreign policy - explaining why it has been plagued by disasters like the “forever wars” in Iraq and Afghanistan and outlining what can be done to fix it.

In 1992, the United States stood at the pinnacle of world power and Americans were confident that a new era of peace and prosperity was at hand. Twenty-five years later, those hopes have been dashed. Relations with Russia and China have soured, the European Union is wobbling, nationalism and populism are on the rise, and the United States is stuck in costly and pointless wars that have squandered trillions of dollars and undermined its influence around the world.

The root of this dismal record, Walt argues, is the American foreign policy establishment’s stubborn commitment to a strategy of “liberal hegemony.” Since the end of the Cold War, Republicans and Democrats alike have tried to use US power to spread democracy, open markets, and other liberal values into every nook and cranny of the planet. This strategy was doomed to fail, but its proponents in the foreign policy elite were never held accountable and kept repeating the same mistakes.

Donald Trump won the presidency promising to end the misguided policies of the foreign policy “Blob” and to pursue a wiser approach. But his erratic and impulsive style of governing, combined with a deeply flawed understanding of world politics, are making a bad situation worse. The best alternative, Walt argues, is a return to the realist strategy of “offshore balancing,” which eschews regime change, nation-building, and other forms of global social engineering. The American people would surely welcome a more restrained foreign policy, one that allowed greater attention to problems here at home. This long-overdue shift will require abandoning the futile quest for liberal hegemony and building a foreign policy establishment with a more realistic view of American power.

What listeners say about The Hell of Good Intentions

Offshore Balancing may not be the only answer to all the mistaken military battles that I and others have criticized, but under the umbrella or optics of Liberal Hegemony it's easy to see the errors of both political parties thinking (as I did) that the spread of democracy was for the good of all. Offshore Balancing under moral leadership is worth striving for.... For American Patriotic ideals and values and the globe.

This is an excellent piece of work! The author provides substantial background and examples to support his arguments. More importantly he not only points out the major deficiencies with the US’s foreign policies, but also proposes an alternative path - Offshore Balancing and the difficulty in making such a change. This work should be mandatory reading in our schools’ civic classes to provide for a fertile basis for debate.

It was a little tough to absorb some.of the word

it was a little difficult to absorb the complexity of word choices, but the repetition got me involved and I started to understand the words as I started to focus more on listening. Words such as Hegemony, offshore Balancing, and supremacy, policing, etc. This is exactly how I understood the perspectives of other countries toward the United States.

While the entirety of the book is great overall, clearly chapter 13 stood out as a disorganized afterthought that was politically motivated due to the 2016 election results. Walt effectively whines about the results of the election and doesn't bother to give any sort of credit to the Trump administration for any of its foreign policy wins. NATO spending increases, middle eastern victories, defeat of ISIS, normalizing of relationships with Israel, etc. The rest of the book speaks truth to power about the incompetence of the foreign policy establishment. The truth hurts, but many politicians amd civil servants alike deserve to be called out on their ineffectiveness in the foreign policy realm. He rightly points out the "blob" and their ability to internally steal conversations towards liberal hegemony and away from logical alternatives.

Crazy is doing the same thing over and over again and expecting a different result....clearly America's foreign policy community and those who entrust them to perform their jobs effectively are crazy, as Walt successfully points out.