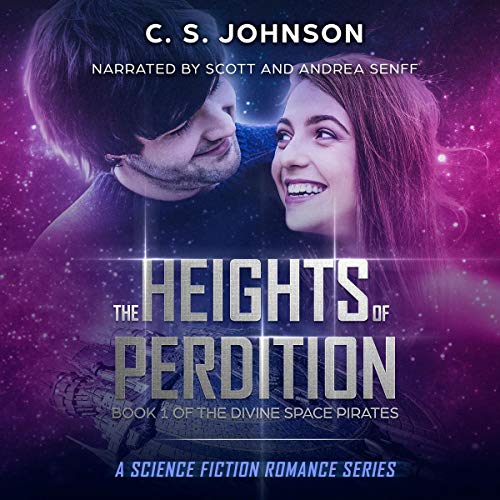 The Heights of Perdition

When survival is all that matters, does truth still make a difference?

"I'm your enemy," Aerie told him. "There. It's that simple. Now, I'd appreciate it if you would stop with the pleasantries and start torturing me. I'll be much happier when I am dead." "I can understand your thoughts on the matter," he said, obviously smothering a laugh, "but I'd love for you to give me the chance to change your mind." Frustration hit her again. Was he teasing her? Or worse - was he telling her the truth?

There is nothing Aeris St. Cloud wants more than to win her father's love and the acceptance of her family unit by joining the Military Academy at New Hope. But after she is captured by the fearsome space pirate Captain Chainsword, Aerie is certain falling in love with her nation's arch enemy is the last possible way to earn their coveted esteem.

Driven by vengeance, Exton Shepherd never set out to save anyone. As he circles the war-torn world in his pirated starship, the Perdition, he only sees his father's ghost lurking around every corner and the looming darkness on the horizon. When Aerie unexpectedly tumbles into his life, he finds he cannot trust her, anymore than he can ignore her. But just like the raging war down on Earth, it's tempting to think he can....

When the war ascends to the heights of the Perdition, Aerie's loyalty, and Exton's heart, are put to the test. But will love be enough to save them - and others - from certain destruction?

The Heights of Perdition is the first book in the Divine Space Pirates trilogy, a futuristic romance series where family, faith, and freedom are all at risk. Look for The Breadth of Creation, the second book, as the story - and the war - continues on!

What listeners say about The Heights of Perdition

The Heights of Perdition was my sixth highly enjoyable read/listen from author C.S. Johnson. Narrator Scott Senff adds greatly to the listening enjoyment with the wide variety of entertaining voices & inflections. I was given an Audible copy of this book & am voluntarily reviewing it and look forward to The Breadth of Creation, Book 2. (RIP Marley January 20, 2014 - July 24, 2018).

I really enjoyed this romantic tale by C.S. Johnson, really well done and I really enjoyed both story and narration - excellent job!
Very lovely tale, and I'd definitely want to listen to more in the series, I'm getting hooked again! :)
Love the Christian aspect to it!

The was my first C.S. Johnson’s book. This is the first book in the Divine Space Pirates Series. This is a good Christian Sci-Fi story, with a complex world, well described. Unfortunately, the story ends with a cliffhanger. The duet narration is well done. Scott and Andrea Senff have a great voice, easy to understand. I received this free review copy audiobook at my request and I have voluntarily left this review.

This was a fun twist on political takeovers, space pirates, Christian romance, and scifi adventure. It has something for everyone and the Christian side of it isn't in your face but a thread that is entwined in the story. It took a little time for me to understand what was going on and really get into the story but I think that's a bit normal for the first book in a series. Beware that this book leaves off on a cliffhanger so now I am waiting for the next one to come out.

I absolutely loved it. Well written. Keeps you on the edge of your seat. Could not put it down. The story of our world from a dystopian, post nuclear war with only threads of humanity left. A very interesting perspective on distant possibilities. it's very refreshing to find a science fiction that includes these perspectives without going into full dysphoria theory. It's funny throughout. The relationship between the captain and the heroine reminds me of a relationship between myself and older sister. Mostly the laughs, sore shoulder and quick wit only siblings can share. The detail and sense of mystery and wonder throughout the story was quite intriguing. The narrator's great and very easy to follow. My favorite part is how God and faith are a focal point throughout the whole story. It's clean and good for people of all ages. Note to the author. I absolutely loved it but patience is not my greatest virtue. I can't wait for the next one

The Author keeps trying to convert me to romance,

The Author keeps trying to convert me to romance, won’t happen. Nice try though. This was a great story, really interested to read the rest in the series. Want to know what is going to happen, how it is all going to play out. The religious side wasn’t that heavy or in your fact. It had an impact and adding an extra layer to the story.

Would have loved to see more sci-fi elements but that just me being a heavy sci-fi fan. It interesting to see the Author take on that element. It got me thinking about different possibilities.

The Meaning of Perdition

This audible books was really amazing,

The story just came to life and I really enjoyed it!

I really hope that the rest are coming out soon.

The story kind of reminded me of a Beauty and the Beast tale,

Cannot wait for more from this author and narrators!

The Heights of Perdition is the first book in the Divine Space Pirates trilogy by C. S. Johnson.

How can Space Pirates be Divine, you ask. Well, they are Christians for one.
How can Christians be pirates, you ask. Basically there is only one way to make pirates the good guys. make the government bad.

This novel takes place in a future world where the USA has fallen and a new socialist regime has risen to fill the power vacuum. Religion is against the law and family is a dirty word. The state is all.

Rather than being a thesis against socialism, this novel is a romance. The story of a Pirate Captain who falls for the daughter of a high ranking general in the new world order.

The best part about this audio version is the use of two narrators. One for the women and one for the men. it really brought the story to life to have the different voices interacting.

Really good start to the series

I very much enjoyed this story. It's a great beginning to the series about surviving in space when you are not allowed to live on earth where you have to live underground. I was gifted an audible copy of the book. The man & woman narraters are very good changing their voices for the main characters. Starting the next book right away.

Can't wait for the next story

I have to admit, I'm not usually a fan of romance stories. What I love best about this, is that while romance is a part of it, it's really a story about relationships in general. I also love how Johnson mixes sci-fi and religion together while holding both in a positive view. What a cliffhanger. Can't wait for the next part!