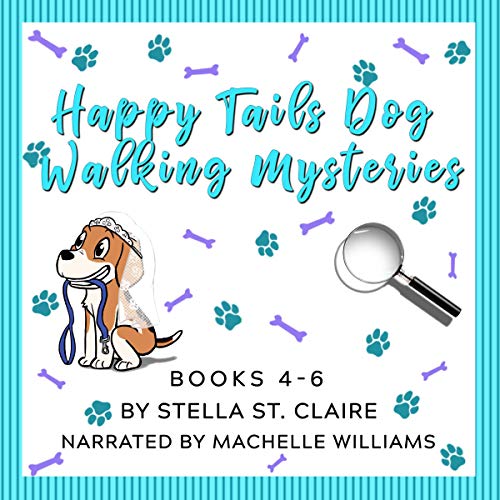 By: Stella St. Claire
Narrated by: Machelle Williams
Try for $0.00

All Bark and No White Knight

Roses are red, Violets are blue, and Olivia Rickard is officially the worst at fixing relationships.

Case in point: Olivia decides the best way to go about getting her boyfriend back is to tail him around town. There’s no way daring to spy on Andrew’s date was going to end well...but Olivia didn’t expect it to end in death.

Hannah Maclin, Andrew’s date, is found dead in the parking lot of the restaurant with a tacky rose sticking out of her chest and lots of suspects near the scene of the crime. Hannah wasn’t a well loved woman, and she’s got a long list of enemies and haters that the police believe includes Andrew.

As Olivia dives into a two-part mystery of solving a murder and tracking her ex-boyfriend’s puzzling movements, she finds that the two investigations weave together in the old secrets and hidden passions of the town. Her mission becomes finding the truth in the misinformation, but Olivia will need to be careful - she can’t miss a clue or she’ll lose the love of her life.

Kept in the Bark

Olivia Rickard has turned over a new leaf. She’s done with outside investigations. Olivia has decided that, to be a better girlfriend, she’s going to turn a blind eye to the mysteries in town. Besides, her sister Janelle is acting fishy enough lately. For Olivia, that mystery is more important to solve than finding out where Andrew’s missing report is. However, Andrew isn’t letting this particular bone go. He’s worried about his coworker, and scared that something might be very, very wrong.

Now time is ticking away faster than the Rocky Road. The Police Chief’s hands are tied, and it seems like Olivia is the only person searching for this lost soul. Olivia will need to accept that she’s born for this sleuthing thing, because giving up on the hunt could mean giving up on ever finding Hattie.

Without Missing a Bark

Dog-nappings are an owners’ worst nightmare. When three rare, expensive, and sought-after puppies go missing within a few days of each other, Olivia doesn’t even need to be asked to take the case. Her clients are like family and she can’t stand to see a family grieve over their missing canine members. But when the investigation leads her to a local jeweler’s, Olivia reveals to her best friend that she’s ready to make things official with Andrew. In her shock, Jackie lets it slip that Andrew was thinking the same thing (and has a new ring to prove it!).

But when the missing puppies lead to the murder of a well-known (and well-hated) romance advice columnist, Olivia and Andrew’s feelings will be tested. Not just in the battle for the bridal win, but in sifting through suspects who wanted to kill the author for ruining their love lives. Olivia and Andrew are in a rush to find who done it, before the investigation does away with their engagement.

The Happy Tails Dog Walking Mysteries is books 4-6 by Stella St. Claire. I so enjoy this series, and the trouble that finds Olivia. Each book in this listen is a standalone, and follows the relationship of Olivia and Andrew, and her dog walking business. The author writes great descriptions that allow me to visualize so much, Machelle Williams is wonderful bringing the characters to life with her smooth performance. She adds the right emotions. I requested this review copy audiobook and have voluntarily written this review. I will definitely listen to more books by this author and narrator.

Olivia's unfortunate knack for stumbling onto dead bodies continues to make for light-hearted mystery fun in three more cozy mystery novels penned by Stella St. Claire.
Intriguing mysteries solved, by the full-time doggie entrepreneur and amateur sleuth with a mixture of persistence, intuition and dumb luck. Olivia is a breath of fresh air and her ongoing romance and family challenges provide an interesting sideline for the usual cozy mystery fare.
Three great stories at a bargain, box set price.

This set of audiobooks was extremely enjoyable. The books have a great combination of murder, mystery, suspense and humor. I really enjoyed the narrators voicing of each character.

Even better than the first book set (books 1-3)

I enjoyed this book set even more than I enjoyed the first set. I learned to really love all of the characters and their quirks. I love how Andrew got involved and, well, really how the whole town got involved. I certainly hope there are more book sets to come in this series. It was a fun world to spend time in and I hope to visit their town and their families again soon. I received this audio book for free upon my request from Audiobook Boom in exchange for my unbiased opinion. This review reflects my own personal opinions of this book set.

The Happy Tails Dog Walking Mysteries Series is a sequel to the set including books one to three. Although this set with four to six could be enjoyed fairly easily as a standalone, I think that the books make more sense if read in order. especially since the personal relationships between the characters grow and change through the series as a whole. This set still features Olivia, a professional dog walker, her sister Janelle, her best friend Jackie and her boyfriend Andrew. I struggled with Olivia's character in the first several books, but she had really grown up and matured by the end of book three. I enjoyed her spunky personality when combined with some hard won wisdom, and her relationship with her friends, both the two-legged and four-legged variety, demonstrates all the hallmarks of a good cozy mystery. Without spoilers, I will just say that the antics between Andrew and Olivia in the final book are hilarious, and I thought the last chapter of the series was picture perfect. This series isn't a romance, but Andrew could easily be considered a book boyfriend with his easy charm and ready acceptance of Olivia and all of her quirks.

Machelle Williams narrates all six books in the series, and I thought that continuity made transitioning between stories incredibly smooth. Although she is not overly expressive, Williams adds just the right level of emphasis to make the scary parts scarier and the funny parts funnier. Her sarcastic turn of phrase for Olivia fits her irreverent personality to a tee.

This series is narrated by Machelle Williams. Machelle does a wonderful job of telling this story. The Happy Tails Dog Walking series is written by Stella St. Claire and this is books 4-6. I have really enjoyed the series and can't wait to read more. I gifted this audiobook with the understanding that I would leave an honest review.

I was voluntarily provided this free review copy audiobook by the author, and found it very entertaining. The characters are very interesting and well written. Life in a small town, may seem quiet to most, but it's never boring for the local dog walker. Olivia has a knack for finding dead bodies and finding the murders. These investigations don't always go smoothly for Olivia as she drags her friends and family along to help her. Chaos and humor is the result in this delightful series that ends in a dog park. I do hope there are more Happy Tails adventures in the future, they're wonderfully entertaining as you drive down the road.

I'm so sad their story has finished. It was a great listen as it had plenty of things happening in the mystery as well as a love story. The bonus was definitely the dogs. Loved the narrator, she did the voices well and the book was easy to listen to.