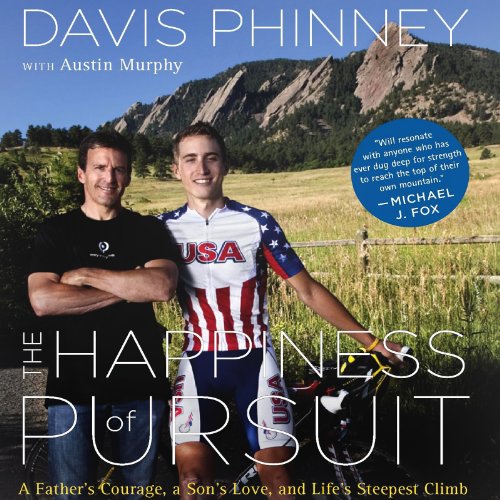 By: Davis Phinney,Austin Murphy
Narrated by: Ira Rosenberg
Try for $0.00

For two decades, Davis Phinney was one of America’s most successful cyclists. He won two stages at the Tour de France and an Olympic medal. But after years of feeling off, he was diagnosed with early-onset Parkinson’s. The body that had been his ally was now something else: a prison.

The Happiness of Pursuit is the story of how Davis sought to overcome his Parkinson’s by reaching back to what had made him so successful on the bike and adjusting his perspective on what counted as a win. The news of his diagnosis began a dark period for this vibrant athlete, but there was also light. His son Taylor’s own bike-racing career was taking off. Determined to beat the Body Snatcher, Davis underwent a procedure called deep brain stimulation. Although not cured, his symptoms abated enough for him to see Taylor compete in the Beijing Olympics. Davis Phinney had won another stage. But the joy, he discovered, was in the pursuit.

With humor and grace, Phinney weaves the narrative of his battle with Parkinson’s with tales from his cycling career and from his son’s emerging career. The Happiness of Pursuit is a remarkable story of fathers and sons and bikes, of victories large and small.

What listeners say about The Happiness of Pursuit

Wish there was more about Parkinson's

Unfortunately, I had an expectation to read about Parkinson's disease and his struggle learning about and living with the disease. This book is mostly about cycling; races, trials, and his son as a cyclist.

A fantastic story which has been inspirational for me. Davis is a winner. Simple as that