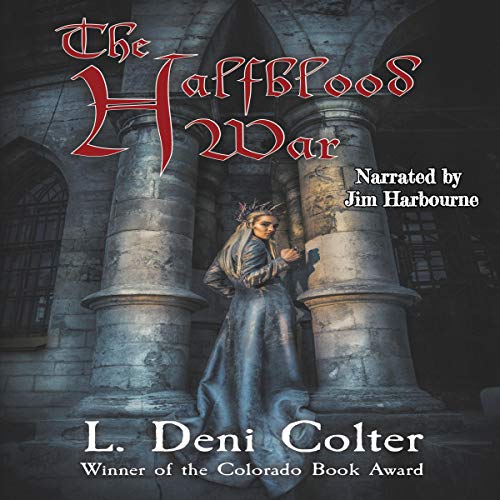 By: L. Deni Colter
Narrated by: Jim Harbourne
Free with a 30-day trial

A sweeping story of love and war, prejudice, and acceptance....

Tirren, heir to the ruler of Thiery, has raised his half-Elven son in a land that hates and fears the Elves, but his son’s struggle for acceptance is only one source of Tirren’s pain. The other is his unfading desire for Yslaaran, the Elven woman who 18 years ago captured him in a spell, seduced him, and vanished. She returned only once more - to hand him his infant son.

When a neighboring ruler attacks the land of Thiery, Tirren rides to battle with his half-breed son at his side. Learning of the war, Yslaaran fears the conflict will unravel her long-laid plans for the boy. If she doesn’t interfere, he could die before his time, but if she reveals her hand by meddling, her own people could rise up against the humans they despise - and that will trap the land between two deadly enemies.

The fate of two races hang in the balance, but only Yslaaran knows that both humans and Elves risk a future more devastating than war.

What listeners say about The Halfblood War

I read mostly science fiction, so am very particular about those fantasy novels I decide to read, but was familiar with the author's work and gave this one a shot. I'm glad I did. It was an enjoyable investment of my time. I was engaged almost immediately with interesting and believable characters, then enthralled by a vividly painted fantasy world, that avoids the tired tropes associated with magic and elves. The smart and exiting plot is told from multiple POVs and unfolds beautifully to a logical and satisfying conclusion. Highly recommended.