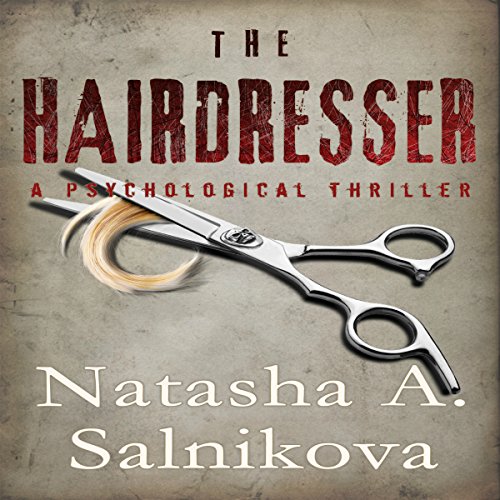 By: Natasha A. Salnikova
Narrated by: Tim Lundeen
Try for $0.00

George Spenser loves his neighbor, Sara. They have been friends for years, but when Sara begins dating someone else, George doesn’t want to let her go. He doesn’t want her to be with anyone but him. He kills her and cuts her hair as a memento of his feelings for her. After that, George begins his quest to find another woman who looks like his first love. Now he’s a famous photographer and a killer they call Hairdresser.

What listeners say about The Hairdresser

A Thriller with lost potential.

I thought the story had potential to evolve but it simply did not expand as I thought was possible.

If you’ve listened to books by Natasha A. Salnikova before, how does this one compare?

This is my first time she has talent and will listen to some of her other books.

Have you listened to any of Tim Lundeen’s other performances before? How does this one compare?

No but he is a good narrator and gave me more motivation to continue with the Audible Book.

Not unless the plot was changed.

'The Hairdresser' follows the disturbed George Spenser as he searches for a woman he's already killed. With a decent, but somewhat cliched plot, this story delivers some enjoyable twists and turns that make it a pretty good physiological thriller. It's not the best or most sophisticated one of these I've ever listened to, but if you enjoy this genre it's very likely you'll enjoy this story which includes interesting characters and a compelling mystery to solve! Tim Lundeen delivers a very good narrative performance.

There were very disturbing aspects to this listen but I knew that going in. I mean, Hairdresser is a serial killer how could that not be disturbing. True to form, when we are inside Hairdresser's head it is incredibly unsettling.

The twists and turns of this listen are what makes it a great listen. We get a variety of perspectives with a variety of backstory's and we get sensitized and desensitized in the process.

The cop was admirable, overworked and misunderstood.
The main female character, and the object of Hairdressers obsession, was likeable and unlikeable in equal measures.
Hairdresser raised the ick factor to an exponential degree and yet no one who knew him, "knew" him.

The narration was excellent. As stated above, there is a variety of characters with a range of emotion and the narrator kept in step. That's actually remarkable when you consider how many times the POV changed and the degree of emotion from sanity to insanity and from clarification to complete nonsense.

I'm not sure if this listen is for everyone but it is the embodiment of psychological thriller.

What an excellent writer! Kept me on the edge of my seat throughout!

Tim Lundeen did a great job of narrating. He made the characters come alive.

This book read like a really bad Lifetime movie script. This is the first book I’ve listened to that I could not bear to finish. Going into this book, I was excited, thinking it would be similar to Caroline Kepnes’s book, You. Far from it. I hate to write a negative review, especially since this is a really competitive industry; however, I owe it to my fellow listeners to stay away!!

Scary at how real this book reads.

If you like thrillers, this book is for you. Stayed up all night. I received this audio book for free at my request and voluntarily reviewed.

I found this book a bit slow in places. Overall it's a good read. Great idea for a storyline, characters with depth.
Tim Lundeen did a great job of the narration.