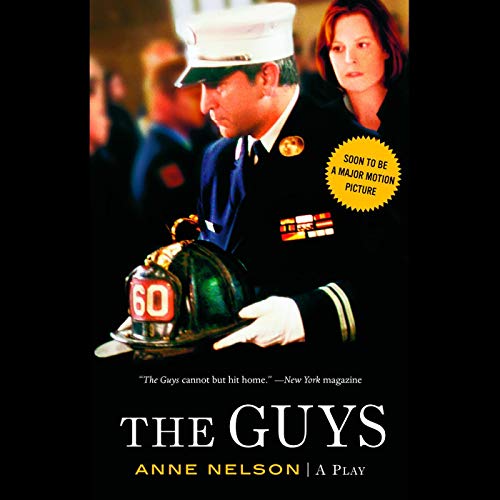 First performed in a hit Off-Off-Broadway production, and soon to be a film starring Sigourney Weaver and Anthony LaPaglia.

Paralyzed by grief and unable to put his thoughts into words, Nick, a fire captain, seeks out the help of a writer to compose eulogies for the colleagues and friends he lost in the catastrophic events of September 11, 2001. As Joan, an editor by trade, draws Nick out about "the guys," powerful profiles emerge, revealing vivid personalities and the substance and meaning that lie beneath the surface of seemingly unremarkable people. As the individual talents and enthusiasms of the people within the firehouse community are realized, we come to understand the uniqueness and value of what each person has to contribute. And Nick and Joan, two people who under normal circumstances never would have met, jump the well-defined tracks of their own lives and so learn about themselves, about life, and about the healing power of human connection through talking about the guys.

The Guys is also available in print from Random House.

©2002 Anne Nelson (P)2002 Random House, Inc.
One passage of the play, "The Science of Pain," was adapted from the book Listening to Prozac, by Peter D. Kramer
Original jacket photograph courtesy of Content Film

"A credible and powerful voice to a very specific kind of pain that we crave to understand these days." (The New York Times)
"A stark and simple, potent and poignant play, brimming with edgy humanity." (New York Post)
"The Guys will likely forever be the primary theatrical artifact of the immediate post-September 11th moment." (Variety)

I thought this was a good treatment of the topic, that the firemen did not set out to be heroes, but each was unique and memorable to his team. I recommend this audiobook.

There are two characters - the editor and the fire captain. I thought some of the material the editor includes about herself was good and to the point. For example, the anecdote about how she comes to contact her husband who can see the towers out his window. Also her thoughts that other NYers shared that she wanted to do something significant after the tragedy.

But there was a little much about her, I would cut 30% of her parts. And it seemed to end suddenly, like she didn't do enough of the firefighter portraits to satisfy. As I understand, this was written as a play, and written very rapidly. Maybe other later versions will be improved?

Still, very interesting, the dialog was good, worth listening.

An extraordinary short play based on the author's 9/11 experiences played by two actors in dialog and monologue. This was a brief and captivating listen, very well suited to the audio book medium. This audio book has rightfully won an Audie award. The play did very well in New York and outside, apparently attracting a stream of heavy actors to do their turn at the roles. This audio book version features Swoosie Kurtz and Bill irwin. Good writing and excellent use of the format. I wish I could share it with friends.

I am living in Germany and I heard from the collapsing of the twin towers of New York during my ride home from work. At first I thought this was was a really sick joke, the extend of this is simply unbelievable. Than I couldn`t stop watching this over and over at the TV. I spoke with all my friends in the US via the internet and tlephon to hear if they were affected and to comfort them (and me). But now this play: It made me sad, I even wept (I never did that before). It made me feel so sad for the Guys, just normal Guys, no Heroes at all, but they are Heroes for me. This play is so simple and, yes, human, everybody should know it. The narrators both are great, I will listen to it again and again. Thanks !
Karin from Dresden

In the wake of 9/11, after attending the memorial service of one of the 343 firefighters who perished, and wanting to do something, my husband chose to spend a year as a civilian firefighter in Saudi Arabia. I heard about Ms. Nelson's play at the Flea Theater in NYC, how it had come to be written, and had an opportunity to see a benefit production of it in Philadelphia in 2002. I sent a copy of the play to my husband whose comment was "She gets it. She has captured the voice of the firefighter." Since then we have given a copy to the parents of that young FDNY probie, and my husband, now doing the same work in Iraq, has a copy of the DVD which has been viewed by the men with whom he serves. I'm delighted to see this made available on Audible. Because the story is told in conversation between just two "characters", the listener gets everything he/she needs, missing nothing of the minimalist action on stage.

I am also grateful to Ms. Nelson for her real life ministry to that FDNY captain and to the countless fire houses she visited, assisting the grieving firefighters of the city of New York in managing the avalanche of media attention they received.

The next time you see an engine or ladder on the road, pull your car over and say "Thank you" for men and women who are dedicated to running into burning buildings. Remember that approximately 90% of the firefighters in the USA are not paid for doing so. They are also every bit as professional as the guys who are paid.

I am a New Yorker and experienced much of the same pain expressed in by Anne Nelson's lead character. However, I'd argue that the reading of this piece is a bit superficial and it felt a lot like listening to a made-for-tv-movie. The decisive ownership the narrator tries to exert over the disaster sounds self-absorbed, this is MY CITY, she declares, but in a voice that lacks believability. Swoosie Kurtz's performance makes it seem more like she wishes she had experienced more hands-on disaster. Perhaps it is Nelson's history of objective reporting that makes the emotion in this play feel overzealous and overcompensatory. The fire captain however seems real. I like him. He portrays an authenticity that Kurtz lacks. In summ, I feel this piece is trying too hard, and perhaps in doing so detracts from the touching memories of the fallen firefighters.

A wonderful telling of a tragic story. We all know the details or so we think until the men came alive in the narrative. Well performed and emotional.