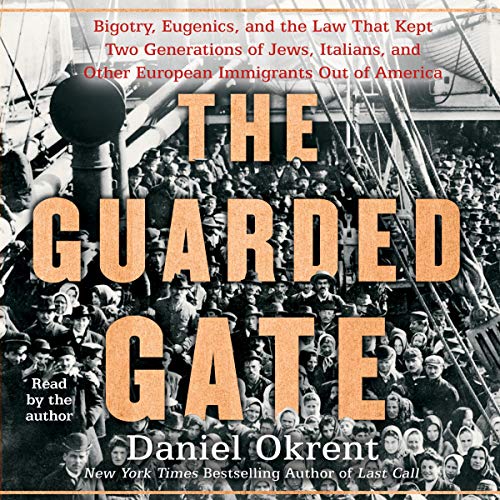 Named one of the “100 Notable Books of the Year” by the New York Times Book Review.

From the widely celebrated New York Times best-selling author of Last Call - this “rigorously historical” (The Washington Post) and timely account of how the rise of eugenics helped America keep out “inferiors” in the 1920s is “a sobering, valuable contribution to discussions about immigration” (Booklist).

A forgotten, dark chapter of American history with implications for the current day, The Guarded Gate tells the story of the scientists who argued that certain nationalities were inherently inferior, providing the intellectual justification for the harshest immigration law in American history. Brandished by the upper-class Bostonians and New Yorkers - many of them progressives - who led the anti-immigration movement, the eugenic arguments helped keep hundreds of thousands of Jews, Italians, and other unwanted groups out of the US for more than 40 years.

Over five years in the writing, The Guarded Gate tells the complete story from its beginning in 1895, when Henry Cabot Lodge and other Boston Brahmins launched their anti-immigrant campaign. In 1921, Vice President Calvin Coolidge declared that “biological laws” had proven the inferiority of Southern and Eastern Europeans; the restrictive law was enacted three years later.

In his trademark lively and authoritative style, Okrent brings to life the rich cast of characters from this time, including Lodge’s closest friend, Theodore Roosevelt; Charles Darwin’s first cousin, Francis Galton, the idiosyncratic polymath who gave life to eugenics; the fabulously wealthy and profoundly bigoted Madison Grant, founder of the Bronx Zoo, and his best friend, H. Fairfield Osborn, director of the American Museum of Natural History; Margaret Sanger, who saw eugenics as a sensible adjunct to her birth control campaign; and Maxwell Perkins, the celebrated editor of Hemingway and Fitzgerald.

A work of history relevant for today, The Guarded Gate is “a masterful, sobering, thoughtful, and necessary book” that painstakingly connects the American eugenicists to the rise of Nazism and shows how their beliefs found fertile soil in the minds of citizens and leaders both here and abroad.

What listeners say about The Guarded Gate

So much concern about immigration today. It seems like this may never happened before. tells the story of racism and how immigrants including Jews, Irish, Poles and especially Southern Italy and Southern Europe had to struggle and suffer discrimination to immigrate. In fact, immigration was always a problem in America, and our forbearers, mine from Sicily and Southern Italy struggled to enter the country and gain acceptance. It also reveals the dark truth about eugenics, enforced sterilization, sanctioned by presidents, academics, scientists and the attempt to purify and create a super race of humans. In turn, it was taken up and Hitler and the Nazi party. Subsequently the nearly successful attempt by the government to bury this part of US history leading up to WW2. I think every American should read this book.

This was an excellent listen, very informative and a welcome challenge to vocabulary. I must listen more than just once.

Is history actually ‘repeating itself with Trump/Stephen Miller Policies?

Recommended by Farid Zakaria who has not steered me wrong yet!

This is an important historical review to place, in context, some of the current policies, as informed and justified by the same false nationalist fears that informed the “No Nothing movement” in the early 1900’s.

So, consider what vision of America’s future is grounded in a world that does not exist in 2019, even questionable in 1919, a hundred years ago.

A Must Read to fully grasp the implications of current misguided policies which may be taking us to a place than no Real Americans (Remember “E Pluribus Unum”) want to inhabit. very important book.

Amazed at the amount of work put in to an act to promote stereotypes while subverting basic human rights under the guise of "pro American" (master race - white) eugenics. Really puts into perspective where we stand as a society today, worldwide. Surprising detail throughout the history of these initiatives presented in a narrative that is terrifying and compelling.

Too much detail. Too much editorializing. Let the facts speak for themselves. Mediocre narration by the author.

Deeply researched work that was surprisingly well performed by the author. An important account of a shameful time in US history.

Well documented book. It made me wonder how close I may have come to NOT being an American citizen. My Italian family came to America just 2 years before the Johnson Reed Act in 1924. How my life would have been different. How many lives would have been saved had those who fought for pure nativism realized that their families also came here for the very same reasons. Heartbreaking!

Another Story in History that amazes me

Amazing to see how this truly evil thinking was the precursor to what happened in Nazi Germany. A definite must read to better understand the history of the 20th Century.

This book certainly woke me up to our jaded history, what wasn’t taught in the history books... It was hard at first for me to get a grasp on... but once I realized how true it could be today, I couldn’t stop listening to it.
Especially if you love history, you will definitely like this book.