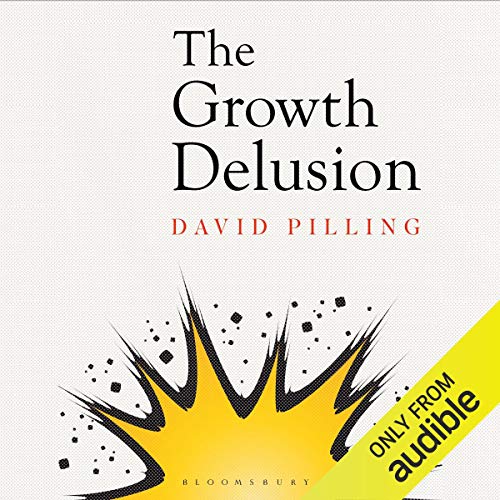 By: David Pilling
Narrated by: Elliot Hill
Try for $0.00

A revelatory and entertaining book about the pitfalls of how we measure our economy and how to correct them, by an award-winning editor of The Financial Times.

According to GDP, the economy is in a golden era: economic growth has risen steadily over the past 70 years and shows no sign of stopping. But if this is the case, why are we living in such fractured times, with global populism on the rise and wealth inequality as stark as ever?

In this book, author and prize-winning journalist David Pilling demystifies gross domestic product, a tool that measures the goods and services a country produces in a set period. Revered by economists, GDP is considered evidence of a country's success and well-being. Yet GDP is actually, at best, a numbers game, unequipped to deal with the nuances of the digital economy and developing nations. It also lacks moral judgment: such is the drive for growth that heroin consumption is valued more than volunteer work. By fixating on GDP, experts are ignoring alternative models that better reflect reality and ushering in policies that could even harm us.

In characteristically clear and lively prose, Pilling draws on a quarter century of reporting to argue that our steadfast loyalty to GDP is informing misguided policies - and contributing to a growing mistrust of experts that is shaking the foundations of our democracy. We live in a society in which a priesthood of economists, wielding impenetrable mathematical formulas, sets the framework for public debate. Ultimately, it is economists who set the agenda for how much we can spend on our schools, highways, and defence; who decide how much unemployment is acceptable and whether it is right to print money or bail out profligate banks. The backlash we are currently witnessing suggests that people are turning against the economists and their faulty representation of our lives.

Despite decades of steady economic growth, many citizens feel more pessimistic than ever and are voting for candidates who voice undisguised contempt for the technocratic elite. For too long economics has relied on a language which fails to resonate with people's lived experience, and we are now living with the consequences.

What listeners say about The Growth Delusion

An excellent education in economy without being bi

This book is the best thing you can read if you want to understand why economy works as it does now. Very well written, simplifying GDP and what it actually means for our societies. I recommend it very much.

Great book made even better by great narration

This is a very timely book, given our withdrawal from Europe. You see, it’s not all about GDP, income and growth at any cost. Even with a growing “economy” many people feel no better off or, worse, left behind. When you realise what a slippery and artificial construct GDP is, you realise how absurd headlines that bemoan growth falling short of expectations by 0.1%.

I have to say that the narration was superb and really added to this. Reminded me of Richard E. Grant during the quotations.

At long last it seems the tide is turning at least perceptibly in economic thinking if this book and some of the recent IMF pronouncements are any indication. This book is definitely for you if you have found yourself frustrated by the mindless pursuit of economic growth and reckless deregulation that has characterised economic policy for generations.

It's a brave book because not only does it challenge status quo of greed before welfare but it tries to offer alternative approaches to measuring a country in ways more conducive to overall wellbeing. Some of the suggested answers are also very open to question but the book makes an extremely strong case for modifying our current strategy of being so heavily reliant on GDP as it is currently defined. It uses numerous examples to demonstrate how this has been detrimental to our current wellbeing and more importantly our future.

Elliot Hill makes for a decent narrator of this kind of material although he does use the same, rather overly-effected voice for most of the quotations which to my taste could have done with being toned down a little.

In short, it's not a book with all the answers though it covers a lot of possibilities but it does clearly demonstrate that we should be investing heavily in establishing fairer and more sustainable ways of measuring and managing modern economies to bring benefits for the many rather than the few,

Something every politician should read

I have read several books over the years about the stupidity of measuring national success by measuring growth of GDP, but this is far the best, being easy to follow, entertaining and straight to the point. Gross Domestic Product is the sum of all economic activity in a nation i.e. everything that is sold for money, and Pilling describes the history of this concept and how politicians have come erroneously to think that growth of GDP equates to national wellbeing. It doesn't of course: GDP includes things like sale of illegal drugs, crime & prostitution; it implies that pollution is a positive by-product of growth; and it ignores voluntary and domestic work completely. And producing ever more stuff than in previous years means you need ever more people to buy it, so soon we must reach the limit of potential consumers and the limit of the planet to provide raw materials and cope with the waste products, CO2 in particular. Why did Donald Trump run away from the Paris Climate Agreement? Because he thinks it will damage GDP growth in the US. Need I say more?
I first became interested in green politics and economics sometime in the 1980s after reading "A Blueprint for Survival" by Goldsmith & Allen, one of the founding documents of the Green Party written way back in 1972. The message about Growth was the same in that book, so there is nothing new here, but what I like about The Growth Delusion is that it doesn't come from any political party or perspective, but is written by a mainstream economics journalist. Maybe the message is beginning to get through at last? Let's hope some of our world decision makers take heed before it is too late.

Hard to listen to.
Narrator reading quotes (of which there are many ) in a stupid voice bugged me.
Other than that the book was ok.

The awful “quoting” voice of this narrator makes the whole book difficult to listen to.

Data and the GDP concept are not the most exciting of subjects, however this book appropriately explains what GDP is and why it’s used. It’s essentially the Body Mass Index of finance. An outdated and poor/manipulated way of measuring something.

An interesting listen made irritating by the dull-voiced narrator’s airy change in tone when reading quotes. Worth one listen if you can overcome this but probably won’t be something I’ll listen to again.

I’ll also be avoiding books read by this narrator in future, no matter the content.

Fantastically put together. The ideas behind this book have the ability to dramatically change the way we view the world. It highlands how we have got hung up on the systems that govern our lives and forgot why the systems were setup in the first place.

Good book, narrator not the best

I liked the book, a lot of interesting stories and ideas, I liked the narrator too BUT it's annoying everytime he tries to impersonate someone when quoting them he just ends up sounding like an asthmatic.

This is a good example of a book that has been translated well to audio. The narrative can be text-book-like dry at times, but this is the nature of the subject rather than the book itself so it gets five stars.

The book itself is quite concise, flows well and the length at 8.5 hours is just right. I dipped in and out of this over about 5 listening sessions and I didn't feel I lost the flow.

The writer of the book has a very optimistic outlook and reflects on world travel as well as research (that incidentally chimes with my own views and experience).

Unless you're already an expert in this area then this is well worth 8.5 hours of your time. Or if you just want an antidote to materialistic modern life, or have a more utopian view of the future.

Fascinating and makes so much sense

I have often wondered if it was just me who didn't believe growth to be the 'be all and end all' to measure a nation's prosperity. Measuring the rise of GDP alone just leads to us all working harder and faster, getting more stressed and living in more polluted and sprawling cities. Where is the measure of well-being for us and our beloved countryside?

This book explains clearly the way things work now, and alternative methods - already being tried and tested in forward-thinking countries - which take account of sustainability of resources and how to balance wealth and well-being for everyone. This isn't some idealistic idea of all being equal, which could never work, but it does value the quality of life and health of our planet.

I am no economist but even I can see how wrong the current system of evaluation is when EVERYTHING is measured in Pounds, Dollars, Euros etc. For example, the value of a forest is calculated by the amount of money it would be worth if all the trees were cut down and sold. No matter the issue of biodiversity of the flora and fauna that live there or carbon-capture or value to our health and sanity.

The moral here is that there is more to life than ever-increasing production and wealth. I highly recommend this book to those who can open their minds or just always suspected that there is a better way.