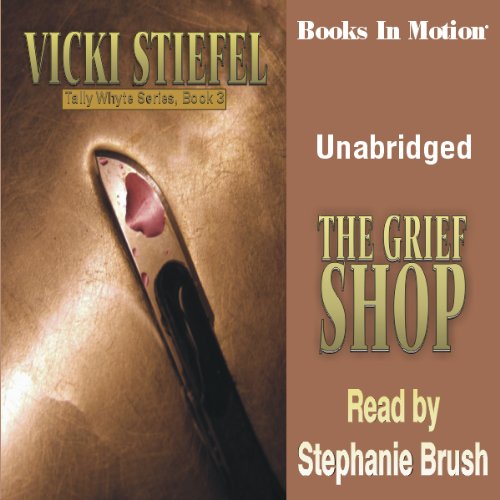 By: Vicki Stiefel
Narrated by: Stephanie Brush
Free with a 30-day trial

Tally Whyte has seen a lot of dead bodies in her years with the Massachusetts Grief Assisstance Program, but this is the first time a murder victim has been brought there by the murderer himself. During the night, someone broke into the Office of the Chief Medical Examiner, aka the Grief Shop, and left behind a tragic calling card - the body of a young girl, bearing a message that reads: Sins of the Fathers.

The girl's playmate is also missing. Could she be another victim? Or can Tally still save her before the killer strikes again? As the mysteries multiply and Tally's life is threatened, she scrambles to prevent another child from falling prey to a madman's warped sense of justice.

What listeners say about The Grief Shop

This is the third in a four book series about a homicide counselor who heads a nonproffit organization connected to the Massachusetts Chief Medical Examiner in Boston. Tally's foster mother, the chief medical examiner, becomes ill and is hospitalized. Meanwhile, a body appears in the morgue...but it was a body that shouldn't have been there.

Tally is surrounded by a colorful cast of characters including the chief medical examiner, (Tally's foster mother), and the doctor's sister, several medical examiners, one of whom does not have good intentions and a kick butt German Shepherd who belonged to the state's k-9 unit until her leg was blown off.

A well woven story with a couple of subplots. Intense from beginning to the bitter end, this book will keep your on the edge of your seat.