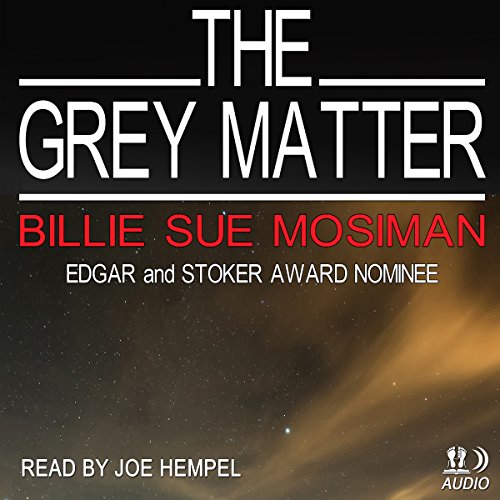 By: Billie Sue Mosiman
Narrated by: Joe Hempel
Try for $0.00

The mountains of DeKalb County, Alabama, were majestic, tranquil, inspiring, and isolated. Just the type of place a man like John Grey would choose to call home. A land where he was king of all he surveyed. A land where he could be God himself, if he chose to be. Until those kids moved into the cabin below the ridge.

It had been perfect at first for the four young people. Friends since their broken childhoods, now they stood together at the threshold of adulthood. They were a family by choice, not by nature. When supplies dwindled and society failed, so did the rules of civilization and the mountain closed in. Not all predators walk on four legs.

The Grey Matter is a novel of white-hot suspense where life is unpredictable and survival is paramount. Who is a friend and who's the enemy?

What listeners say about The Grey Matter

An unusual audiobook containing a serial killer, abused children and an apocalyptic event! The story revolves around a group of teens that live in a cabin in the mountains; they find themselves fighting to survive against the collapse of society, a serial killer, hunger, and some desperate and psychotic people. It is fast paced story that keeps your attention and takes you on a violent journey of anarchy and death. The characters are interesting and you soon become invested in the teens survival. The narration fits the book excellently; from children to serial killers, the narrator manages to give life and personality to each of the characters. It is an unusual and interesting storyline, but I did feel that it could have been a bit more suspenseful in parts and I found the gory scene in the hotel a bit too strange. Overall it is interesting, has great narration and is worth listening to. I received this audiobook at no cost in exchange for an honest review

The premise for this listen was a good one. The end of civilization forces a group of abused teenage friends to kill or be killed. A serial killer is suddenly without a steady supply of victims. Who will survive?

It would have been more believable if the dialogue had been a little better.

Joe Hempel was a decent narrator and brought the story to life.

I recieved this audiobook for free from Audiobook Boom! in exchange for an honest review.

What made the experience of listening to The Grey Matter the most enjoyable?

What does Joe Hempel bring to the story that you wouldn’t experience if you just read the book?

The narration by JOE HEMPEL was excellent. He has great vocal skills and voice inflections. I really liked him in this book as he had the perfect voice for the characters. I've listened to him before and he reads at a very professional level

The story was interesting and compelling. It had twists and turns and shows that life is what you make for yourselves

Kept me wanting more till the end....

Would you consider the audio edition of The Grey Matter to be better than the print version?

Haven't been able to compare but the narrator does a good job.

The story was interesting and compelling. It had twists and turns and shows that life is what you make for yourselves.


"This audiobook was provided by the author, narrator, or publisher at no cost in exchange for an unbiased review courtesy of AudiobookBlast dot com."

Deliverance revisted this time the odds are better

Okay, I could not put this book down. I really enjoyed it and even though predictable, was cheering for the "good guys". The characters were well developed but too goody two shoes. NO teenager is that perfect and all four of these were every Mother's dream. The story and narration were good. Even though the main characters were a bit unbelievable, it is a good read.

This book was gifted to me by the author in return for an unbiased review by Audiobook Blast. Thanks

What did you love best about The Grey Matter?

That the kids in the cabin were all so close and had much respect for each other.

Yes. When all the electricity went out and things took a turn for the worst, all of the crazies came out and the world became a scary place.

When the crazy neighbor was tied up, and there were several other scenes that were good too.

When Caleb found his parents.

This book was a lot better than I expected. I thoroughly enjoyed it, and the narrator kept it very interesting.


This audiobook was provided by the author, narrator, or publisher at no cost in exchange for an unbiased review courtesy of Audiobook Blast.

I enjoyed listening to this book. Nothing supernatural here. Just a great book about what could possibly happen after a large scale EMP attack on the US. Pretty good character development, but never really got attached to any of them. Probably liked Josie the most, but I'm sure that's because she was essentially a damsel in distress from a downtrodden family.

Narration was very good in my opinion. Smooth and fluid. Good emotion when needed, and rather animated throughout.

Overall, good book and worth a listen if you like Apocalyptic type scenarios.

I received a free copy of this audio book for an honest review.

The Grey Matter is the story of four young adults who have made a home in the mountains of Alabama. Abe, Ben and Josie have been abused and neglected all of their young lives. Caleb is their wealthy young friend who takes them in and makes a home for them all. Together these four friends learn that family is not necessarily what you are born into, but what you make for yourselves.

Yes, intricate suspense that had me wanting more.

What other book might you compare The Grey Matter to and why?

Well, what came to my mind, somewhat reminiscent of The Stand. Good against Evil. Realizing The Stand is a Classic and over 1300 pages long. But in the most general sense, that was what came to mind.

Which character – as performed by Joe Hempel – was your favorite?

Sorry, I'm drawing a blank on this question.

The author, Billie Sue Mosiman has created a suspenseful scenerio and populated it with real characters that readers will truly care about. The narrator, Joe Hempel pulls off believable narration and adds to a good listen.


Thank you for the chance to listen to this audiobook.


This audiobook was provided by the author, narrator, or publisher at no cost in exchange for an unbiased review courtesy of AudiobookBlast dot com.