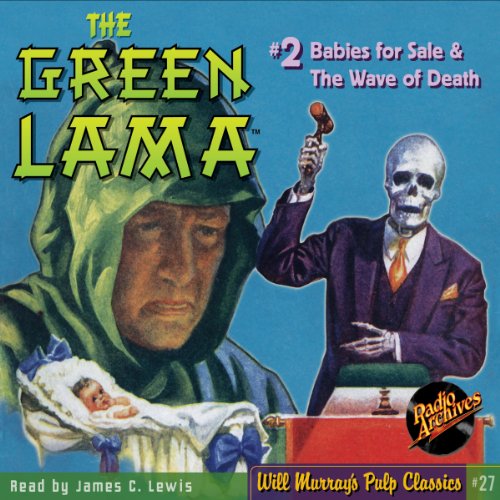 The jade-robed Buddhist priest who battled crime as "The Green Lama" is back! Conceived in 1939 at the behest of the editors of Munsey Publications to compete with "The Shadow," "The Green Lama" was the creation of writer Kendell Foster Crossen, who was asked to think up a hero who could lure mystery-minded readers away from "The Shadow's" loyal legion of followers.

"The basis for the Green Lama came after I'd read a non-fiction book review in the New York Times about an American who really became a lama," Crossen once recalled. "The book was titled, The Penthouse of the Gods."

From that gossamer inspiration, the writer spun an outrageously unique superhero. Returning to the States, young Jethro Dumont assumed an alternative identity of the Buddhist cleric, the Reverend Dr. Pali, then began gathering about him a band of civic-minded citizens to join him in his Buddhistic battle against suffering in all forms - particularly those caused by criminals. And aiding him from the shadows, the mysterious Magga, a woman of many faces who had taken an interest in guiding The Green Lama's campaign against malefactors.

It was an outlandish concept. While The Shadow possessed the power to cloud men's minds after his time in the East, The Green Lama relied on other, even weirder, powers - including the ability to become radioactive and electrically shock opponents into submission! He carried a traditional Tibetan scarf, which he employed to bind and befuddle opponents, and possessed a knowledge of vulnerable nerve centers which he put to good use in hand-and-hand combat. Being a practicing Buddhist, it would not do for The Green Lama pack a pair of .45 automatics à la "The Shadow"!

"The real success of the Lama was because of the mysticism," Ken Crossen recalled. "We received a tremendous amount of mail about the Lama. People would come into the offices of the publishing company asking to see him. If he wasn't there, they'd want to talk with Richard Foster." Foster was the name of the imaginary "author" of the series.

The wisdom and courage of the lama defeat domestic and international evil. But will we ever know Marga's real face?