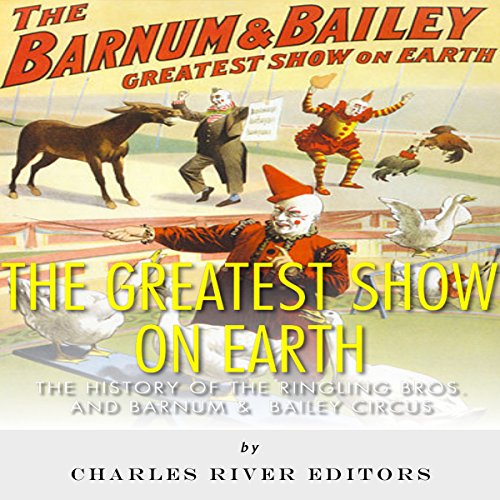 The Greatest Show on Earth

By: Charles River Editors
Narrated by: Johanna Oosterwyk
Try for $0.00

Americans have loved traveling circuses for generations, and none represent the country's love for entertainment quite like the most famous of them all, the Ringling Bros. and Barnum and Bailey Circus. The five brothers who started a circus in Wisconsin, as well as P.T. Barnum, have had their names become synonymous with the circus, so it's only fitting that the manner in which these men entered the business and the merging of their traveling circuses together also make for great stories.

Circus promoters have long been viewed as somewhat shady hucksters, but none could top P.T. Barnum, who used a blend of traditional circus entertainment, freak show exhibits, and outright hoaxes to create "The Greatest Show on Earth".

Around the same time that Barnum was operating the Barnum and Bailey's circus, the Ringling Brothers were engaging in more traditional circus activities in Wisconsin. As their traveling circus became better known in the late 1880s, it was advertised as the "Ringling Brothers United Monster Shows, Great Double Circus, Royal European Menagerie, Museum, Caravan, and Congress of Trained Animals". The Ringling Brothers were eventually successful enough that they were able to buy Barnum's circus after Barnum had already died, and they merged the traveling circuses together in 1919.

What listeners say about The Greatest Show on Earth