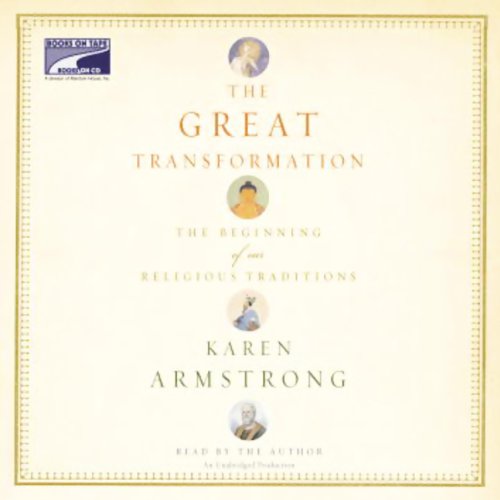 From one of the world's leading writers on religion and the highly acclaimed author of the best-selling A History of God, The Battle for God, and The Spiral Staircase, comes a major new work: a chronicle of one of the most important intellectual revolutions in world history and its relevance to our own time.

In one astonishing, short period - the ninth century BCE - the peoples of four distinct regions of the civilized world created the religious and philosophical traditions that have continued to nourish humanity into the present day: Confucianism and Daoism in China; Hinduism and Buddhism in India; monotheism in Israel; and philosophical rationalism in Greece. Historians call this the Axial Age because of its central importance to humanity's spiritual development. Now, Karen Armstrong traces the rise and development of this transformative moment in history, examining the brilliant contributions to these traditions made by such figures as the Buddha, Socrates, Confucius, and Ezekiel.

Armstrong makes clear that despite some differences of emphasis, there was remarkable consensus among these religions and philosophies: each insisted on the primacy of compassion over hatred and violence. She illuminates what this "family" resemblance reveals about the religious impulse and quest of humankind. And she goes beyond spiritual archaeology, delving into the ways in which these Axial Age beliefs can present an instructive and thought-provoking challenge to the ways we think about and practice religion today.

A revelation of humankind's early shared imperatives, yearnings, and inspired solutions - as salutary as it is fascinating.

Excerpt from The Great Transformation:

"In our global world, we can no longer afford a parochial or exclusive vision. We must learn to live and behave as though people in remote parts of the globe were as important as ourselves. The sages of the Axial Age did not create their compassionate ethic in idyllic circumstances. Each tradition developed in societies like our own that were torn apart by violence and warfare as never before; indeed, the first catalyst of religious change was usually a visceral rejection of the aggression that the sages witnessed all around them.... All the great traditions that were created at this time are in agreement about the supreme importance of charity and benevolence, and this tells us something important about our humanity."

"Dazzling prose with remarkable depth and judicious breadth." (Publishers Weekly)
"This could very possibly be one of the greatest intellectual histories ever written." (Library Journal)
"A lucid, highly readable account of complex developments occurring over many centuries....A splendid book." (The New York Times)
"Armstrong at her best - translating and distilling complex history into lucid prose that will delight scholars and armchair historians alike." (The Washington Post Book World)

What listeners say about The Great Transformation

Fills in the blanks

I think this book is a very well researched and non judgmental view of the beginnings of the major religions. It fills in a lot of the blanks and explains the inconsistencies in many of the sacred writings. I listened to this one before "Short History of Islam" and enjoyed her narration much more - she should narrate all of her own books. Definitely worth the listen!

An excellent piece of work

A great, concise history of our religious traditions covering China, India, Israel and Greece. I found the balance of presentation of fact and analysis perfect, there is no forced agenda here, and there is more than enough room for your own thought and conclusions. There is no doubt much more to be read concerning this topic, and the reader is left with enough knowledge to pursue any further investigations they may want to.
The book is an epic listen, and if your purposes are informational then it’s a great bet. If you are more inclined to study the material I would suggest the printed version, (as I will be purchasing) mainly for notes and also for what must be a massive bibliography.
The work is read by the author and she does a fantastic job, even paced and well spoken.
I'll be spending more time with this book.

Good starting point, but take with a grain of salt

I enjoyed how the author brought together many world religions and compared them, but I feel as if she failed to sufficiently compare them and prove they were essentially the same thing (as was her thesis). Had the author simply recalled history and left it at that, I would have enjoyed it more. Also I would have liked it if the author had discussed each religion individually instead of breaking up all the different religions along chronological order. I didn't want to use this as a resource, but had I wanted to talk specifically about ancient Greek Religion I would be forced to search several dozen different sections of this book for information, as opposed to just one.

I agree completely with Colin. This is a superb book, as are all of Karen Armstrong's works. But it is dense and requires complete concentration, preferably with a world map and a dictionary beside you. I bought the printed version after listening to this, and it's probably a better form to use.

I am loving the book.
*However, I should point out that these books are jewels and they deserve their respective pdf. It might be worth considering merging or somehow connecting kindle and audible.*

A great review of the past!

This book is a treasure that opens one's eyes into the world of power, benevolence, sacrifices, bloodshed, injustice ALL at the same time! It's been like this, it will always be a circle.

I have one minor complaint. The book chapters and the audible chapters don't line up.

As a Seminary graduate, I found this book very refreshing. It discusses the development of religious ideas from the perspective of a historical approach to idea development that is chronological and cross-cultural. This is not a good book for a person interested in faith formation within a particular tradition but an enticing listen for a student of religion, person interested in ecumenical/Interfaith discussions, and/or a person seeking to identify undergirding precepts that can be found in Ancient Near Eastern and East Asian spirituality.

Armstrong is as impressive a source on religion as there is in the world. She's also a tremendous writer who can make dry subjects interesting. I definitely learned a lot here. The histories of the major religions are told in great detail. Anyone interested in religion and world history should read this book.

Armstrong takes the listener throughout the historical contexts of the religious developments in the world. She argues that at times these religions can be used by the ego to cause harm but at the core of them all is the call to leave the ego and live by love. Great for anyone seeking to understand his neighbors and coexist in love and peace.