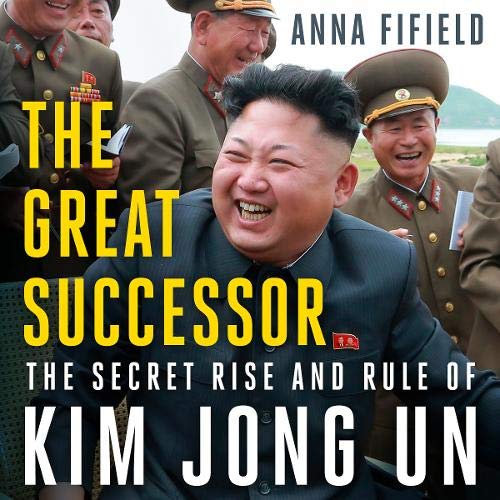 By: Anna Fifield
Narrated by: Olivia Mackenzie-Smith
Try for $0.00

The behind-the-scenes story of the rise and reign of the world's strangest and most elusive tyrant, Kim Jong Un, by the journalist with the best connections and insights into the bizarrely dangerous world of North Korea.

The Great Successor is an irreverent yet insightful quest to understand the life of Kim Jong Un, one of the world's most secretive dictators. Kim's life is swathed in myth and propaganda, from the plainly silly - he supposedly ate so much Swiss cheese that his ankles gave way - to the grimly bloody stories of the ways his enemies and rival family members have perished at his command.

One of the most knowledgeable journalists on modern Korea, Anna Fifield has exclusive access to Kim's aunt and uncle who posed as his parents while he was growing up in Switzerland, members of the entourage that accompanied Dennis Rodman on his quasi-ambassadorial visits with Kim, and the Japanese sushi chef whom Kim befriended and who was the first outsider to identify him as the inevitable successor to his father as supreme ruler. She has been able to create a captivating portrait of the oddest and most isolated political regime in the world, one that is broken yet able to summon a US president for peace talks, bankrupt yet in possession of nuclear weapons. Kim Jong Un: ridiculous but deadly, and a man of our times.

What listeners say about The Great Successor

Enjoyed this book, loved the background information to be able to understand the now. Brave lady Anna may you and your loved ones be protected with truth and coating of love around you. This book has been written as observational not to condemn. May it be seen as this by all who read it.

Didn't really like the narrator. Some interesting insights about Kim Jong Un but overall it just felt like the author was judging him / telling him off more than anything. I just found the style and tone of it irritating.

It is incredibly detailed and the anecdotes are very interesting. Fifield also provides all the context necessary to understand the background of the regime.

A fascinating, thorough and insightful listen.

I’ve listened to this book at a faster pace than almost any other audiobook I’ve bought. If you have any fascination with North Korea, this very well researched book is a definite recommendation.

Fascinating insight into an unknown kingdom. Expertly researched.
I enjoyed the bits about his childhood.

A brilliantly detailed account of the life and times of a monstrous dictatorial dynasty. A compelling account beautifully narrated by Olivia in her lovely clear, diction perfect antipodean accent.

The narrator sounds like she is standing on a podium,narrating to hundreds of people,I much prefer it when it seems as though a book is being read to me,and me alone.

Really well researched and narrated. If NK is your thing this is a really good book

Really interesting book. Absolutely blew my mind and opened my eyes to the nut house that is the KIM dynasty and how their control the North Koreans. I feel sorry for them.