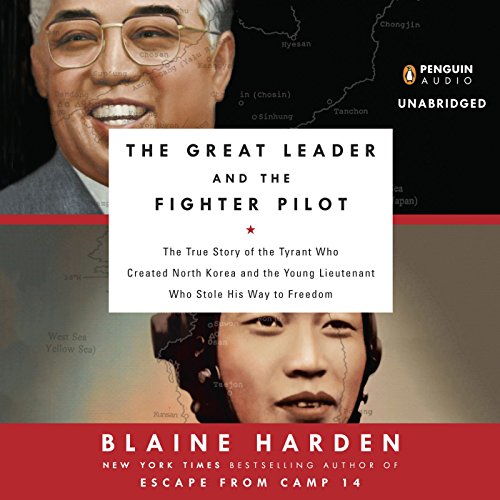 The Great Leader and the Fighter Pilot

By: Blaine Harden
Narrated by: Mark Bramhall
Try for $0.00

From the best-selling author of Escape from Camp 14, the murderous rise of North Korea's founding dictator and the fighter pilot who faked him out

In The Great Leader and the Fighter Pilot, New York Times best-selling author Blaine Harden tells the riveting story of how Kim Il Sung grabbed power and plunged his country into war against the United States while the youngest fighter pilot in his air force was playing a high-risk game of deception - and escape.

As Kim ascended from Soviet puppet to godlike ruler, No Kum Sok noisily pretended to love his Great Leader. That was until he swiped a Soviet MiG-15 and delivered it to the Americans, not knowing they were offering a $100,000 bounty for the warplane (the equivalent of nearly $1 million today). The theft - just weeks after the Korean War ended in July 1953 - electrified the world and incited Kim's bloody vengeance.

During the Korean War, the United States brutally carpet bombed the North, killing hundreds of thousands of civilians and giving the Kim dynasty, as Harden reveals, the fact-based narrative it would use to this day to sell paranoia and hatred of Americans.

Drawing on documents from Chinese and Russian archives about the role of Mao and Stalin in Kim's shadowy rise as well as from never-before-released US intelligence and interrogation files, Harden gives us a heart-pounding escape adventure and an entirely new way to understand the world's longest-lasting totalitarian state.

"A fascinating retelling of a tale from the early years of the Cold War....[an] artful narrative." (The New York Times)

"Blaine Harden has done more than anyone else to bring [North Korea] to a mass audience.... Thrilling stuff." (The Washington Post)

What listeners say about The Great Leader and the Fighter Pilot

Didn't expect to hear so much about Kim il sung as well as the Korean War in general. I recommend this audiobook. The performance was really clear and comprehendible.

Didn't expect such a gripping story

love love love it. I had listened to and thoroughly enjoyed Escape from Camp 14, another of the authors books, but I still didn't expect this to be so good. My standard for a good audio book is if it keeps me driving around town just to listen. This one hit that mark. I found myself running numerous errands that I either made up, or had been putting off for some time, just to keep listening. Worth a listen not only for the historical perspective about the founder of the DPRK, but also the very personal story about a man who had had enough and decided to take his chances with his enemy.

Such a thorough story of the early years of North Korea. It will help you understand the present.

This book was absolutely extraordinary. worth the read and the audio that went with it made it even better !!!

The parallel stories of Kim Jong-il and the young fighter pilot are each compelling in their own right, but this book weaves them together in a meaningful and moving way.

The detailed glimpse into North Korea of the 1950s.

Well worth a listen.

A short book that was well written and we'll told. A beautful way to get a good synopsis of Korea.

This story is very important for Americans because most of us know very little about the formation of North Korea. Knowing some of the history helps in understanding their actions today.
The other half of the story adds a wonderful personal touch to the book. I enjoyed learning about this pilots journey to reach America.

Seriously an amazing and enjoyable story

What did you love best about The Great Leader and the Fighter Pilot?

The narrative kept moving, switching scenes seamlessy, and kept you wanting to know what happened next. It was full of fun insights and small quirks that other histories would overlook.

Obviously the fighter pilot himself. He's got moxie.

Which character – as performed by Mark Bramhall – was your favorite?

THANKFULLY Mark Bramhall had the good sense not to Perform Characters in various voices, etc. he just told the story like I was reading the book, without the goofy kids-play accents and whatnot.

Not really, but thats not to say it wasn't great. It's greatness was spread so equally that no particular moment was just SO amazing. Other than the climax, but thats sort of by definition what you would expect.

This is a fun story for just about anyone, and not too long. It's going to be especially great if you like history, or have any fascination with the utter bizarreness that is North Korea. Surprisingly, it had a lot of Korean War info in general regarding the state of affairs as the war went on, between US, Korean, Chinese, and USSR forces. Kind of was expecting, for some reason, it not go into to much actual military or political history outside of this guys story, but was pleasantly surprised!

The tie between the fighter pilot and the North Korean leader was on point. I wanted to understand how this country came to be. This book did not disappoint.

A great story that lends itself to a fantastic Audible experience. Mark Bramhall is officially my favorite Audiblizer. Nicely done.