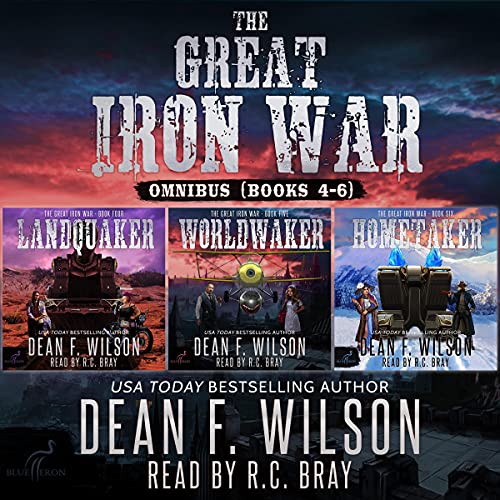 The final three books in the Great Iron War steampunk dystopian adventure series, collected together in a digital box set. Join Jacob, Whistler, General Rommond, and Taberah as they take to the rails, to the sky, and to the homeworld of the Regime in their desperate attempt to save humanity.

The Resistance has barely nursed its wounds from the recapture of Blackout, and now it's looking to another, tougher target: the massive steam-powered railway gun known as the Landquaker, the sentry gun of the formidable Iron Wall.

To conquer this rail-mounted cannon, Jacob and company turn to old allies and new friends, from the land-loving tribes to the land-roving biker gangs. They'll need every soldier they can muster.

The Landquaker was designed with a singular purpose: a monstrous gun to hold back a multitude of monsters. Except this time, the multitude mans that weapon, and in its hands the land is not the only thing that quakes.

Every victory is its own defeat. General Rommond's efforts to amass technological superiority over the enemy has resulted in the creation of a weapon that could destroy everything, and a faction just mad enough to use it.

The Armageddon Brigade has awoken from its deep slumber, and it seeks to wake the world with it. Attracting the brightest, and most unstable, of minds, this splinter group of the Resistance has become the greatest thorn in Rommond's side.

The Resistance and the Regime must unite to defeat a foe that answers to neither of them. Yet their deep divisions and long-held suspicions threaten to end the Great Iron War once and for all - by ending everything.

The Resistance races against time to complete the missile-launcher known as the Hometaker, capable of opening a gateway to the land the Regime came from, and exposing the Iron Emperor for all the evils he's done.

Everything rests on the secrecy of the mission, but from day one, tongues are wagging. The atmosphere is like dynamite. An overheard word could light the fuse.

With no time left on the clock, General Rommond is forced to make an audacious plan: finish the construction of the Hometaker on the move, driving straight towards the enemy, who've assembled in unimaginable force. The Great Iron War is coming to an end. It's all or nothing - their world or ours.

Books 4 – 6 are an enjoyable, satisfying, and fun conclusion to the Great Iron War saga. Character development continues to flourish and yet there are turns and disappointments. I enjoyed the mystic elements that worked its way into the story. Clever metaphors are in abundance. Porridge returns with R.C. Bray delivering laugh-out-loud moments. In fact, R.C. Bray does an absolutely outstanding job giving voice to all the characters. This is a great story, and the audiobook version is a joy and pleasure to listen to.

Though some aspects of the conclusion are bittersweet, this series leaves us with a feel-good sense about characters that I’ll remember long after the details of the battles are forgotten.

I was provided a complementary copy of the audiobook by the author, no strings attached. I am happy to provide this review as a way of saying thank you for the journey and the enjoyment the author gave me.