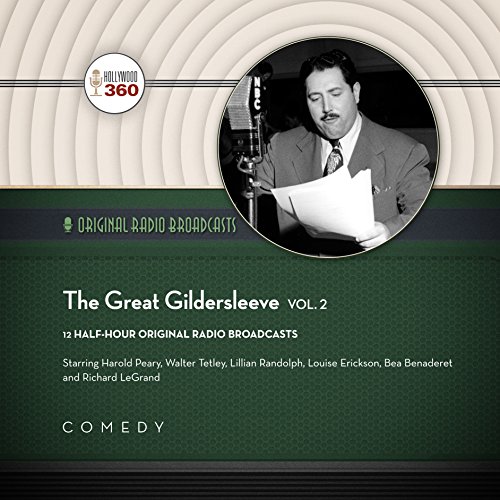 Throckmorton P. Gildersleeve was a popular character appearing each week on the Fibber McGee and Molly radio show. On August 31, 1941, Gildersleeve landed his own situation comedy, The Great Gildersleeve, becoming radio's first spin-off.

Gildersleeve moved from the town of Wistful Vista, where Fibber McGee and Molly lived, to Summerfield, where he oversaw his late brother-in-law's estate and took on the rearing of his orphaned niece and nephew, Marjorie and Leroy Forrester. The household also included a cook named Birdie. The Great Gildersleeve was the first show to center on a single parent balancing child-rearing, work, and a social life, and it was accomplished with taste and genuine wit, often at the expense of Gildersleeve's slightly understated pomposity.

What listeners say about The Great Gildersleeve, Vol. 2

This series is very entertaining. Harold Leary is unsurpassed as a great entertainer with a under appreciated voice.