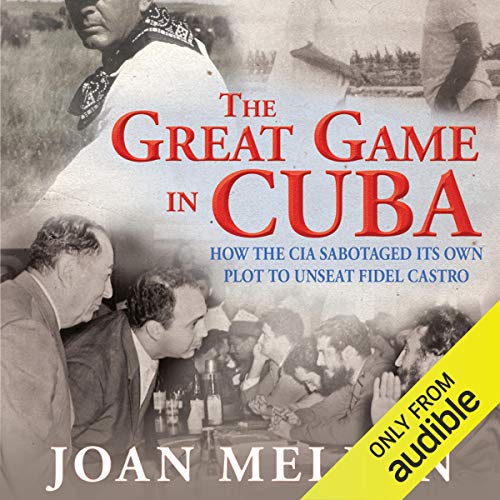 The Great Game in Cuba

By: Joan Mellen
Narrated by: Katina Kalin
Try for $0.00

The Great Game in Cuba uses the backdrop of the Cuban Revolution to examine the CIA's inner workings during the '50s and '60s. Detailing the agency's lies and deceits, Mellen paints a vivid behind-the-scenes picture of the CIA in Cuba after the Castro revolution: what it wanted and the lengths it was willing to go to in order to paralyze the opposition to Fidel Castro.

The game begins with Robert J. Kleberg, Jr., proprietor of the legendary King Ranch, one of the largest ranches in the world. Kleberg's messianic ambitions bring him to Cuba, where he establishes a satellite ranch managed by his right-hand man, the James Bond-type character Michael J. P. Malone, who secretly reports to both the FBI and at least five CIA handlers.

From there the plot thickens as an array of Cubans share never-before-revealed information regarding the agency's activities in Cuba and its attempts to unseat Castro and install a CIA-friendly figurehead in his place. The mysterious disappearance of Camilo Cienfuegos, a major figure in Castro's government, is told here for the first time. The agency's shady dealings with a major US publication are uncovered.

A testament to the sheer volume of previously classified and untold information, The Great Game in Cuba is a story the world needs to hear.

What listeners say about The Great Game in Cuba

If you love contemporary history.. how we got here

Impressive, if you love contemporary history and how we got here.... this is the book for you. CIA and the Monroe Doctrine at its best 👌 how it has ruined the Americas 🌎 with so much deep details that left me wondering... How long is this failing policy will keep few corporations in power?
must read to the end.....

An interesting but meandering story, and all the statements should be fact checked before being accepted as correct. I discovered two factual inaccuracies with another pair being quoted by authors who's credibility is highly suspect.
After that I took what the author claimed with a grain of salt. It really is creative nonfiction full of unsubstantiated claims. Mellon is clearly biased against the CIA, however she backs up very few of her claims with documentation instead relying on vague references to first person interviews.
This an interesting tale, but far more opinion and story telling than a work of historical significance.

Still cannot grasp how Dulles brothers permitted a communist government 90 miles from US while going all in in Vietnam. A nearby and convenient existential risk vs remote and hypothetical risk. I’m happy no invasion of Cuba but sad for extreme loss of lives in Vietnam. This book added several puzzle pieces but complete picture remains blurry.