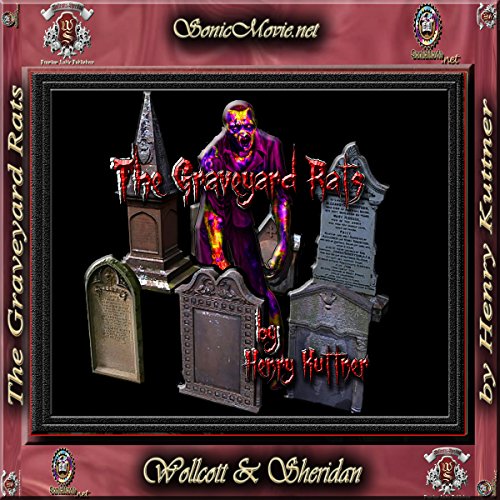 A grave robber glances at a coffin he's recently unearthed and opened, and, enraged, he witnesses his prized corpse being drawn out the chewed end of the coffin into a subterranean burrow by the graveyard rats. Without thinking, he dives in after it and, crawling through the underground maze, pursues the corpse only to discover he is being pursued by the gargantuan rats and something far more ominous...the undead.

What listeners say about The Graveyard Rats

this book wasn't as good as the other books that by k. Anderson Yancy . that he perform or whatever. I am very disappointed because the other books I've listen to that's by him or other others and him where actually good.

"I was provided this audiobook at no charge by the author, publisher and/or for an unbiased via audiobookBlast dot com.

It had me squirming by the end of the story.

it started slow, ended red hot !!Highly Recommendable, great for a Halloween listening. given this review copy for no expectations.

What did you love best about The Graveyard Rats?

I really enjoyed the story itself as it built up the tension and took the time despite a short running length to be extra creepy throughout from the beginning until the conclusion.

As I answered this same question above I'll address a different aspect of it which was the usage of sound effects that fit perfectly with what was going on at the time. There were a couple times when they were possibly too loud in relation to the narration but I still found it understandable and it was as they purport, just like the audio from a movie.

Which character – as performed by K. Anderson Yancy – was your favorite?

There was only one character in this story, a nameless grave robber so he get's the nod, but he was done well so that's nothing against him.

If you could take any character from The Graveyard Rats out to dinner, who would it be and why?

Considering the other options are rats, I think the only one that makes sense is the grave robber. If I had to do so it would be interesting to talk to him about the art of grave robbing. Unfortunately I doubt he's still alive.

I received a copy of this audiobook in exchange for an honest review. I've come to enjoy the sonic movie portrayal of classic stories quite a bit. Highly recommended.

I liked the story, I actually cringed at the end of the story. That's a good thing, as I really like horror books and rarely get that reaction.

What about K. Anderson Yancy’s performance did you like?

I enjoyed the story and narration, the side effects were pretty cool but were louder than the speech at times. I was listening on an Amazon Echo, so maybe it was because of the speaker...

Yeah, the ending made me cringe in bed!

Would you consider the audio edition of The Graveyard Rats to be better than the print version?

I was provided this audiobook at no charge by the author, publisher and/or narrator in exchange for an unbiased review via AudiobookBlast dot com
The narration was great. Really gave the story the suspense it needed to make it a proper scary short story.

The sound effects were a little too loud to the point where I couldn't hear some of the narration but other than that loved the Sonic Movie.