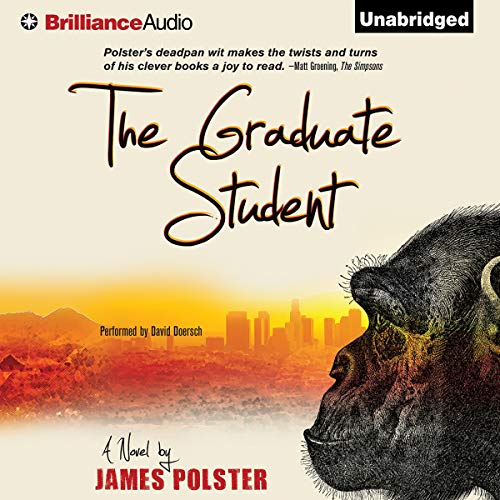 By: James Polster
Narrated by: David Doersch
Try for $0.00

For seven months, anthropologist Blackwell James has lived among the Wantayo people of the Amazon, immersing himself in their culture in order to collect data for his dissertation. Trouble is, he hasn’t done much research. Instead, he’s just hung out with the tribe, resulting in some fair skills with a bow and arrow but little else. When Blackwell returns to Columbia University with a trunk full of hallucinogenic vines but no research notes, his frustrated advisor packs him off to Los Angeles to assist a colleague with a primate experiment. But for an East Coaster freshly returned from the jungles of South America, Hollywood is a surreal new world, home to a cutthroat tribe of actors and filmmakers scrambling for money and fame. Caught up in the secret ambitions of his new employers, Blackwell begins a strange trip through the surreal world of movie stars, murder, and money. A secret society, a ghost town, two large chimpanzees, and several shamanistic drug-induced journeys round out this outrageous novel, which features “cameos” by Sylvester Stallone, Johnny Depp, and Steven Spielberg. Gleefully continuing the great literary tradition of comic Hollywood novels, The Graduate Student is an exuberant and riveting ride.

What listeners say about The Graduate Student