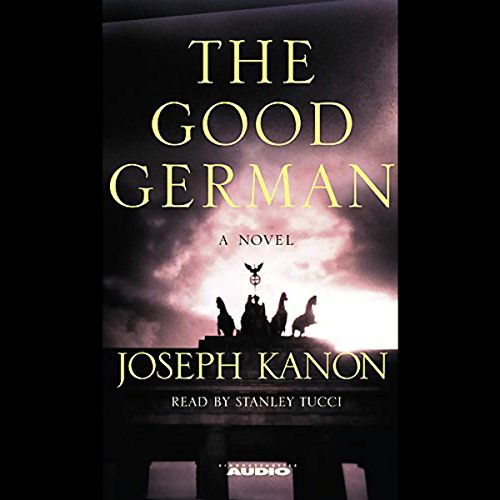 By: Joseph Kanon
Narrated by: Stanley Tucci
Try for $0.00

With World War II finally ending, Jake Geismar, former Berlin correspondent for CBS, has wangled one of the coveted press slots for the Potsdam Conference. His assignment: a series of articles on the Allied occupation. His personal agenda: to find Lena, the German mistress he left behind at the outbreak of the war.

When Jake stumbles on a murder - an American soldier washes up on the conference grounds - he thinks he has found the key that will unlock his Berlin story. What Jake finds instead is a larger story of corruption and intrigue reaching deep into the heart of the occupation. Berlin in July 1945 is like nowhere else - a tragedy, and a feverish party after the end of the world.

As Jake searches the ruins for Lena, he discovers that years of war have led to unimaginable displacement and degradation. As he hunts for the soldier's killer, he learns that Berlin has become a city of secrets, a lunar landscape that seethes with social and political tension. When the two searches become entangled, Jake comes to understand that the American military government is already fighting a new enemy in the east, busily identifying the "good Germans" who can help with the next war. And hanging over everything is the larger crime, a crime so huge that it seems - the worst irony - beyond punishment.

"Thoroughly captivating, a novel that brings to life the ambiguities at the heart of our country's moral legacy." (The New York Times)
"[A] lavishly atmospheric thriller...driven by strong characters and rich historical detail." (Publishers Weekly)

What listeners say about The Good German

This is a great novel, filled with historial insight. The real crime, however is presenting it in an abridged format. The full novel runs something like 16 or 17 CD's, so this abridgement guts the book.

I really enjoyed this book but wish I could've listened to the unabridged version, I always feel cheated with abridged versions, I want to know what else was written. It was very interesting having Berlin described just at the end of WWII when it apparently was much like a moonscape with all the destruction. The Russians, Americans, Brits, and Germans in a time of chaos. The love story was good, too.

Abridged version has ruined this story!

Would have given this 4 stars but for the completely unnecessary abridgment, which quite ruined the story and character development. I might understand abridging a 600 page novel, but not one of regular length!

when looking at the Kindle version this book left so much out it was a different story. I wished I had read it instead of listen to Audible. unfortunately audible hid the fact that it was abridged when I purchased it.

Not as good as I hoped

But interesting nonetheless if you are interested in that period of history. Narration occasionally annoying.

I found the plot following a very typical espionage formula - and quite choppy in execution. there were twists etc. but they seemed put there because it was expected - they kind of just "plopped" out of nowhere as if to change the direction of the story just to keep it going. maybe it was like this because it was an abridged version, but it did not have the substance of what could have been a better book. In fact, it may have been a better story if it was made shorter so you could get to the interesting stuff quicker. the links as I said would appear out of nowhere!
AS for the narration, the accents were very good, but the main character was often too monotone with the story telling, so sometimes I missed if he was saying something or it was part of the descriptive stuff.
it did pick up at the end, that is why I think the rest of it was lacking.

Having just finished the author's "Los Alamos," I was looking forward to "The Good German," but so far, the story has been completely flattened by Tucci's incompetent job of reading out loud. He starts too many sentences in which the predicate comes as a surprise to him; he doesn't know how to provide emphasis without being hammy, and he just drones on and on as though the text was passing before him on a screen, one sentence at a time. His wimpy little milksop voice is nowhere near what's needed for this story. Where's Patrick Tull when we need him?

I didn't know what to expect when I downloaded this book. I had just visited Berlin and I study the Holocaust, so I thought this book would have a bit of both in novel form. It was better than that. The mystery was wonderful. The romantic aspect was not your every day story. I thoroughly enjoyed this novel and don't wish to give any of its mystic away, but it has all parts of what is necessary for a good romantic mystery. I really liked this book and highly recommend it.

Don't listen to the abridged version

This novel suffers from the abridging. Kanon is an excellent author, but... the story jumps around abruptly and leaves out plot elements. The narrator's performance suffers. Very disappointing.